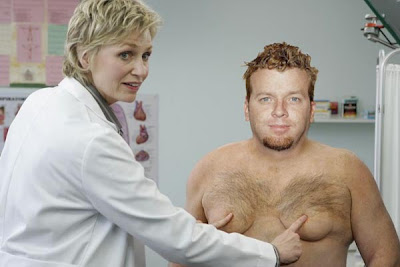 DOVER, N.H.—A New Hampshire high school student shocked so severely in shop class that his heart stopped beating is suing his teacher, the school district and the city of Dover.

Kyle Dubois and his parents claim teacher Thomas Kelley did not warn Dubois and other students of the dangers of the electrical demonstration cords in their electrical trades class.

On March 11, Dubois attached an electrical clamp to one nipple while another student attached another clamp to the other. A third student plugged in the cord.

It'll be for a jury to decide, of course, but I don't know how they are going to discern *pre-existing* brain damage from whatever additional might have resulted from the auto-electro-nipplification!

Plus I'm right sure our own West Coast Tom has indulged in this activity, many times over the years, with ZERO noticeable effects...
Posted by CaptiousNut at 12:57 PM

Did you notice what the teacher was doing when this all went down? He was talking fantasy football with another student and got distracted!!!

My buddy is a teacher at this school and the other scandal was the head of the science department emailed a naked picture of himself to a student at the school. His story: that he was not aware that the person he was conversing with online just happened to be a dover high school junior, what are the odds? The school made him resign with full pay and benefits for a year because the student was not a girl but a boy and they were afraid of a discrimination lawsuit!!! You can't make this stuff up!
Kfell

People online, seeing my avatar, ask me for uncropped, fleshy pictures of myself all the time.

But I don't email them out freely.

And I've even had requests for my *soiled boxers*...