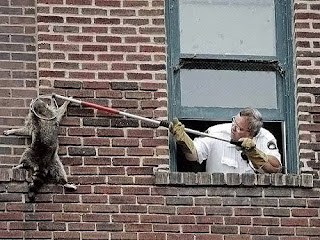 Having had quite enough of the rats and mice in that house we rented in Boston....now we have a new animal problem here on Long Island - raccoons!

Three times already they've got into and torn up my trash bags. You can't leave ANYTHING out, EVER; and you can't forget to close the garage door at night - otherwise they just come in and tear the trash up inside it.

And even when you're diligent about protecting the garbage they can still torture you. Twice already I've been woken up by to-the-death-sounding raccoon fights right outside my bedroom window.

There are tons of high trees around here; we are near the water; and being New York there's plenty of good scavenging around. So it's not like just one or two backyard rodents that need to be *taken care of*.

My wife says, "Now you can see why my father was out there with a gun trying to shoot them!"

It's funny, how subsequent generations end up dealing with the same issues. In fact, Mrs. C-Nut's brother a few years ago killed a coon in his house around this same area with a bow and arrow.

Now I would never dare try to trap these animals in one of those *humane* cages. But the idea of getting a bow and arrow, accidentally leaving the trash out, and sitting up all night by the window seems like it could be good sport. It seems like it'd be a whole lot more fun than shooting a squirrel with BB!

There's no way the solution to animals is yet another animal!

Will that kill them? Or keep them away?

Dead as a doornail.