Morons Discover We Have A "Ruling Class" 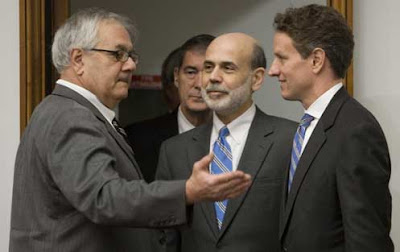 People keep sending me this essay, so I will highlight in hopes that the emails stop!

America's Ruling Class - And the Perils of Revolution

As over-leveraged investment houses began to fail in September 2008, the leaders of the Republican and Democratic parties, of major corporations, and opinion leaders stretching from the National Review magazine (and the Wall Street Journal) on the right to the Nation magazine on the left, agreed that spending some $700 billion to buy the investors' "toxic assets" was the only alternative to the U.S. economy's "systemic collapse." In this, President George W. Bush and his would-be Republican successor John McCain agreed with the Democratic candidate, Barack Obama. Many, if not most, people around them also agreed upon the eventual commitment of some 10 trillion nonexistent dollars in ways unprecedented in America. They explained neither the difference between the assets' nominal and real values, nor precisely why letting the market find the latter would collapse America. The public objected immediately, by margins of three or four to one.

When this majority discovered that virtually no one in a position of power in either party or with a national voice would take their objections seriously, that decisions about their money were being made in bipartisan backroom deals with interested parties, and that the laws on these matters were being voted by people who had not read them, the term "political class" came into use. Then, after those in power changed their plans from buying toxic assets to buying up equity in banks and major industries but refused to explain why, when they reasserted their right to decide ad hoc on these and so many other matters, supposing them to be beyond the general public's understanding, the American people started referring to those in and around government as the "ruling class." And in fact Republican and Democratic office holders and their retinues show a similar presumption to dominate and fewer differences in tastes, habits, opinions, and sources of income among one another than between both and the rest of the country. They think, look, and act as a class.

Although after the election of 2008 most Republican office holders argued against the Troubled Asset Relief Program, against the subsequent bailouts of the auto industry, against the several "stimulus" bills and further summary expansions of government power to benefit clients of government at the expense of ordinary citizens, the American people had every reason to believe that many Republican politicians were doing so simply by the logic of partisan opposition. After all, Republicans had been happy enough to approve of similar things under Republican administrations. Differences between Bushes, Clintons, and Obamas are of degree, not kind. Moreover, 2009-10 establishment Republicans sought only to modify the government's agenda while showing eagerness to join the Democrats in new grand schemes, if only they were allowed to. Sen. Orrin Hatch continued dreaming of being Ted Kennedy, while Lindsey Graham set aside what is true or false about "global warming" for the sake of getting on the right side of history. No prominent Republican challenged the ruling class's continued claim of superior insight, nor its denigration of the American people as irritable children who must learn their place. The Republican Party did not disparage the ruling class, because most of its officials are or would like to be part of it.

Never has there been so little diversity within America's upper crust. Always, in America as elsewhere, some people have been wealthier and more powerful than others. But until our own time America's upper crust was a mixture of people who had gained prominence in a variety of ways, who drew their money and status from different sources and were not predictably of one mind on any given matter. The Boston Brahmins, the New York financiers, the land barons of California, Texas, and Florida, the industrialists of Pittsburgh, the Southern aristocracy, and the hardscrabble politicians who made it big in Chicago or Memphis had little contact with one another. Few had much contact with government, and "bureaucrat" was a dirty word for all. So was "social engineering." Nor had the schools and universities that formed yesterday's upper crust imposed a single orthodoxy about the origins of man, about American history, and about how America should be governed. All that has changed.

Today's ruling class, from Boston to San Diego, was formed by an educational system that exposed them to the same ideas and gave them remarkably uniform guidance, as well as tastes and habits. These amount to a social canon of judgments about good and evil, complete with secular sacred history, sins (against minorities and the environment), and saints. Using the right words and avoiding the wrong ones when referring to such matters -- speaking the "in" language -- serves as a badge of identity. Regardless of what business or profession they are in, their road up included government channels and government money because, as government has grown, its boundary with the rest of American life has become indistinct. Many began their careers in government and leveraged their way into the private sector. Some, e.g., Secretary of the Treasury Timothy Geithner, never held a non-government job. Hence whether formally in government, out of it, or halfway, America's ruling class speaks the language and has the tastes, habits, and tools of bureaucrats. It rules uneasily over the majority of Americans not oriented to government.

The two classes have less in common culturally, dislike each other more, and embody ways of life more different from one another than did the 19th century's Northerners and Southerners -- nearly all of whom, as Lincoln reminded them, "prayed to the same God." By contrast, while most Americans pray to the God "who created and doth sustain us," our ruling class prays to itself as "saviors of the planet" and improvers of humanity. Our classes' clash is over "whose country" America is, over what way of life will prevail, over who is to defer to whom about what. The gravity of such divisions points us, as it did Lincoln, to Mark's Gospel: "if a house be divided against itself, that house cannot stand."

Important as they are, our political divisions are the iceberg's tip. When pollsters ask the American people whether they are likely to vote Republican or Democrat in the next presidential election, Republicans win growing pluralities. But whenever pollsters add the preferences "undecided," "none of the above," or "tea party," these win handily, the Democrats come in second, and the Republicans trail far behind. That is because while most of the voters who call themselves Democrats say that Democratic officials represent them well, only a fourth of the voters who identify themselves as Republicans tell pollsters that Republican officeholders represent them well. Hence officeholders, Democrats and Republicans, gladden the hearts of some one-third of the electorate -- most Democratic voters, plus a few Republicans. This means that Democratic politicians are the ruling class's prime legitimate representatives and that because Republican politicians are supported by only a fourth of their voters while the rest vote for them reluctantly, most are aspirants for a junior role in the ruling class. In short, the ruling class has a party, the Democrats. But some two-thirds of Americans -- a few Democratic voters, most Republican voters, and all independents -- lack a vehicle in electoral politics.

That's only a fraction of the essay. And no, I haven't had neither the time nor the inclination to read the rest.

Unedified by the preceding...I reiterate that the only chance this country has to regain its footing is for the Republican party to dissolve, permanently.

Children of the UN?

On The Elite
Posted by CaptiousNut at 12:18 PM

It came from the American Spectator magazine: http://spectator.org/archives/2010/07/16/americas-ruling-class-and-the

A friend sent it to me. I got 1 graf into it, realized it was 10 pgs of shit I have been saying for years and closed the window. Waste of time.

You know what it is?

It's the current thought of long-time serfs from the Republican plantation.

So it's epiphanous to them at least.

My guess is that 95% will suffer from recurring bouts of Stockholm Syndrome and soon return to the plantation from whence they came.

When I start hearing people discussing anarchy matter of factly at the local watering holes, then I'll think revolution is upon us (hint: this will never happen).

...the only chance this country has to regain its footing is for the Republican party to dissolve, permanently.

Yeah, that's worked so well for us here in Massachusetts.

The Dems now have free reign to make self-serving rules to keep themselves in power and advance their own collective financial position.

I'm not here to stump for the Republican party, but a one party system ain't the answer, my friend...

The Republican party did not dissolve in Massachusetts....it moved out-of-State!

Did you read that article? Early on it suggests that we already have a de facto one-party country:

That is because while most of the voters who call themselves Democrats say that Democratic officials represent them well, only a fourth of the voters who identify themselves as Republicans tell pollsters that Republican officeholders represent them well. Hence officeholders, Democrats and Republicans, gladden the hearts of some one-third of the electorate -- most Democratic voters, plus a few Republicans. This means that Democratic politicians are the ruling class's prime legitimate representatives and that because Republican politicians are supported by only a fourth of their voters while the rest vote for them reluctantly, most are aspirants for a junior role in the ruling class. In short, the ruling class has a party, the Democrats. But some two-thirds of Americans -- a few Democratic voters, most Republican voters, and all independents -- lack a vehicle in electoral politics.

I am not proposing one-party rule. I don't believe there should be ANY *organized* political parties.

If the Republicans dissolve, the Dems lose their convenient bogeyman, and they will be more clearly identified for what they are.

Unfortunately, in some weird distortion of conventional mathematics, no parties = one party.

But I will agree with you that any sucker who seriously thinks there is a difference in the two parties, where one side is noble and the other evil, is either delusional just not paying close enough attention.

To be clear, I did not say nor do I believe the parties are identical. A lot of libertarians go with that imprecise shorthand....but I am not one of them.

So long is there a single party, another will rise (and be cultivated) to be its foil. At that point, they together can collude to divide up power and suppress any upstart competitors.

No, they're not identical, but they are the same.