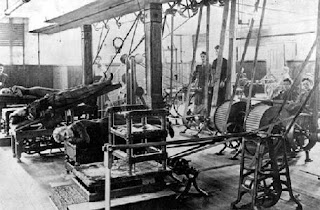 I had no idea that Dr. Kellogg, the founder of the cereal brand and granola, was a complete QUACK:

It was the bowel that got Kellogg's undivided medical attention. Ninety percent of all illness, he would calmly explain, originated in the stomach and bowel. "The putrefactive changes which recur in the undigested residues of flesh foods" were to blame, he explained. Guests who arrived at Battle Creek soon learned that their once-pristine bowel was now a sewer of autointoxication, full of poisons like creatin, skatol and indol.
Kellogg's influence and enthusiasm made the bowel not only an acceptable subject of polite conversation, but a national obsession. More and more people became convinced that their bowel must be given an antiseptic cleansing. Autointoxication begone! The medical wizard of Battle Creek could provide the answer. The bowel, poisoned by meat-eating, drinking, smoking and usually anything pleasurable, was poked, prodded and otherwise assaulted by attendants at the San.

Kellogg made sure that the bowel of each and every patient was plied with water, from above and below. His favorite device was an enema machine ("just like one I saw in Germany") that could run fifteen gallons of water through an unfortunate bowel in a matter of seconds. Every water enema was followed by a pint of yogurt -- half was eaten, the other half was administered by enema "thus planting the protective germs where they are most needed and may render most effective service." The yogurt served to replace "the intestinal flora" of the bowel, creating what Kellogg claimed was a squeaky clean intestine.

If a healthy dollop of yogurt was not enough to do the trick, more drastic steps were necessary. If autointoxication persisted and poisons remained, the offending stretch of intestine was removed. Kellogg performed as many as twenty operations a day.

The result, Kellogg claimed, was nothing short of medical revolution. By pumping yogurt cultures into the rectums of America's well to do, Kellogg claimed that he had managed to cure "cancer of the stomach, ulcers, diabetes, schizophrenia, manic depressives, acne, anemia ... asthenia, migraine and premature old age." There was nothing a clean bowel couldn't handle. 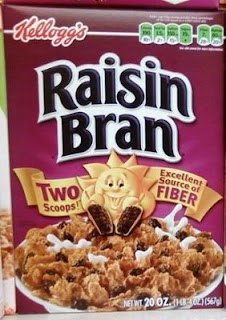 The guy was also AGAINST intercourse AND auto-gratification:

And here's some more from that link on this *Scat Quack*:

Granola was only one of several delicacies the doctor designed for patients at The San. Other house specialties included Caramel Cereal Coffee, Bulgarian yogurt (Kellogg was big on yogurt), and meat substitutes Protose (like beefsteak) and Nuttose (like veal). At one point, Kellogg concentrated solely on nuts. He wrote a paper, "Nuts May Save the Race," and claimed to have invented peanut butter, along with several other nut spreads and Malted Nuts.

Though low on flavor, the ambitious menu helped turn the hospital around financially. Under Kellogg's guidance, most of the patients admitted to The San just needed a diet. They were overweight or overworked. They suffered from Americanitis, treatable with rest, room service and wheelchair socials. The cure rate became remarkably high since no one seriously ill was admitted.

No chronic masturbators were admitted either. Kellogg echoed Graham's doom-and-gloom views on the matter and even added to them. On the night of his honeymoon (more on this in a moment), he spent his time writing Plain Facts for Old and Young, a warning on the evils of sex. Of the 644 pages, 97 address "Secret Vice (Solitary Vice or Self-Abuse)," its symptoms and results. Included are 39 signs indicating someone is jacking off; a list comprehensive enough to indict everyone vaguely human: #7. Sleeplessnes, #11. Love of solitude, #12. Bashfulness and #13. Unnatural boldness, #14. Confusion of ideas, #24. Capricious appetite, #28. Use of tobacco, #30. Acne.

Such was Dr. Kellogg's power play: in rejecting known masturbators from the hospital, he avoided acknowledging there was no real cure. Yet his theories gave him an outlet from poor slobs the hospital diet couldn't help. Dr. Kellogg could diagnose them as masturbators and thus pass responsibility for the problem onto the patient. If the illness persisted, that was proof of secret vice, or that the problem was long-term or irreversible. Dr. Kellogg was never wrong. In fact, he made an issue of abstaining from all sexual relations himself, supposedly to prove that sex was not necessary to health. Though he married Ella Eaton, their marriage was never consummated and they lived in separate apartments.

thought u might find this interesting, as this relates to both schools and big.gov

wallst famous conduit is "fees", "bonus" etc...so nobody can go after them in future.

where can i find gigs that will convince other parties to both give me the money, AND let me charge "fees" of 10-20% in doing so.

Complex finance is Robber Baron's wet dream. Municipalities, pension funds, schools etc are the playground. we are so screed.

so thats brings me to the question, u do pay taxes that go to schools, but u dont use them? That should feel pretty crappy deal. But since both of u guys are in finance industry...i guess u will actually get those tax dollars back multiplied anyways.

we joe6pack are so screwed.

Apparently they are broken down by *purpose*.

9k of them are so-called *school taxes*.

It does seem crappy, especially if the school administration hassles me over my homeschooling (and saving them money!).

But there are all sorts of people who complain about earmarked taxes and the unspecified fungible ones.

Seniors don't even have kids of school age and have to pay the school taxes.

And I've heard pacifists complain that their taxes go to fund the military.

What about Social Security? Every young person today pays in with NO CHANCE of ever getting anything out of it.

My wife is indeed in on the *skim business*. But I never was. I was always independent and client-less. I was a Moron!