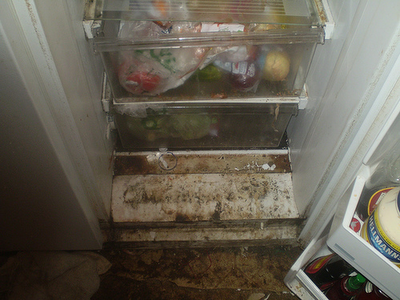 Recall from Evil Fridge and Nasty Fridge Dissection that I've been having some to-be-expected problems with my MIL's old refrigerator.

It's not cold enough and food is going bad in about 4-5 days. So I've been at the supermarket every two days or so!

My MIL called General Electric who, via a sight-unseen phone diagnosis said it was the *compressor* and that they might not make that part anymore. They essentially said to *buy a new fridge*....*can we mail you a catalog?*

I know, shocking, right? An appliance company telling you not to milk an old product when you could go out, even if there is only a 25% chance you buy one of their products, and drop a $1,000-$4,000 on a completely new one.

Yesterday I called a serviceman to take a look at it. After showing up 3 hours late from the appointed time, his assessment was that it most certainly was not the compressor. He called BS on GE!

He said my *auto-defroster* might need to be changed.  So even if I successfully defrosted the fridge and dislodged whatever it was that might be blocking the flow of cold air from the freezer down to the refrigerator....that the problem would just recur shortly thereafter.

How much is that?

"Two and a quarter."

Is it definitely the problem?

Of course, both GE and the fridge guy are exclaiming, "Look at this cheap a$$ mother-bleeper....trying to band-aid a Jurassic appliance!"

Before he left he laughed because he read our minds aloud, "You want a new fridge, but your space is just a little too small to get one of the nice newer models. And you don't want to buy a new fridge for a tight space if there's a chance you are going to completely redo the kitchen soon, right?"

He said he saw the same narrative in every other house he went to. Though he didn't actually use the word *narrative*...

One thing he did warn me about was the longevity brevity of whatever I might buy from GE, Samsung, or LG.

He said the new expensive fridges only last 7-10 years as opposed to the 20-30 years the old ones survived.

Hmmmm....I wonder why GE et al would want to make me buy two or three fridges from them instead of one over the next few decades???

I would not be at all surprised if they did in fact have warehouses full of replacement compressors and whatnot for their older models that they decided to strategically scrap or lie about!

As a kid, I had a wicked awesome red pair of Converse Weapons.

Supposedly, from what I heard, the shoes were so well built that they lasted 14 months instead of the customary 10 months for youth sneakers.

Guess what, Converse took a beating on the extended product cycle and stopped making the shoe altogether!
Posted by CaptiousNut at 8:12 PM