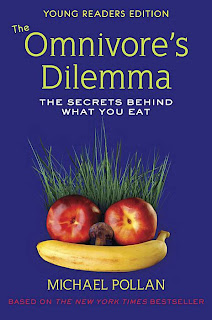 One of you clowns recommended this book to me in my comment section a while back. So I finally reserved it, picked it up last night, and swallowed it whole in one day!

What's it about? Well the title and subtitle - The Secrets Behind What You Eat - lend a sufficient clue.

It was about *how they make the sausage*. Don't want to know, right? Don't ask, don't tell....whatever you do, don't think too deeply about the *animal Holocaust* that you subsidize.

Except I learned some very interesting things from this book. I had no idea that *corn* dominated almost the entire supermarket. The author, Michael Pollan, goes into great detail as to how and why corn products became and reign supreme. He actually blames Big Government intervention!

But first the corn conspiracy theory. From one of his online articles:

For the great edifice of variety and choice that is an American supermarket rests on a remarkably narrow biological foundation: corn. It’s not merely the feed that the steers and the chickens and the pigs and the turkeys ate; it’s not just the source of the flour and the oil and the leavenings, the glycerides and coloring in the processed foods; it’s not just sweetening the soft drinks or lending a shine to the magazine cover over by the checkout. The supermarket itself–the wallboard and joint compound, the linoleum and fiberglass and adhesives out of which the building itself has been built–is in no small measure a manifestation of corn.

There are some 45,000 items in the average American supermarket, and more than a quarter of them contain corn. At the same time, the food industry has done a good job of persuading us that the 45,000 different items or SKUs (stock keeping units) represent genuine variety rather than the clever rearrangements of molecules extracted from the same plant.

And from his book, look at the McDonald's breakdown. This his how much of its *carbon* comes from corn:

Not having thought much about the food that I transform into scat....I had no idea before reading this book that chickens and cattle these days were force-fed corn, a food they wouldn't naturally eat. Apparently grain-fed cattle can be slaughtered at only 15 months or so whereas it takes grass-fed cattle 5 years to fatten sufficiently.  Obviously the latter is more profitable to raise.

Pollan talks about what he calls Big Organic or the industrial organic industry. Consider *Rosie* a Whole Foods chicken:

Rosie lives in a shed with twenty thousand other Rosies. Ah, you ask, what about the "free-range" words on Rosie's label. Doesn't that mean they can "freely range" outside? Not exactly. It's true there's a little door in each shed leading out to a narrow grassy yard. But here's the catch: The door remains FIRMLY SHUT until the birds are at least five weeks old. By that time they are so used to the shed that none of them go outside. And then all of them are slaughtered two weeks later.

Rosie and all the other chickens raised at Petaluma are the same breed: Cornish Cross broilers. The Cornish Cross is a a type of chicken bred for the industrial food chain. It is the fastest-growing chicken ever, turning corn into meat faster than any other bird. They go from egg to full size in just seven weeks. In fact, the birds grow so rapidly that their poor legs cannon keep up. Often, by seven weeks, Rosie can no longer walk.

I absolutely love the FIRMLY SHUT door, the 5 week *re-education* regimen, and the fact that the farm's first four letters are P-E-T-A!!!

Compared to conventional chickens, I was told, these organic birds have it pretty good. They get a few more square inches of living space per bird. (It was hard to see how they could be packed together more tightly.) Because there are no hormones or antibiotics in their feed to speed growth, they get to live a few days longer.

...USDA rules say an organic chicken should have "access to the outdoors."

Admittedly, this book opened my eyes to a lot I hadn't known. But by no means did it close my mouth or stomach. I won't be one of the alleged thousands he's converted to vegetarianism or organic foods.

I'm a pretty healthy eater anyway, and have been trending up in this department for some time. Though I can throw them back and enjoy it tremendously, I'm essentially only a *social drinker* these days. I only drink outside of my house and only on somewhat special occasions.  I've reduced my portion size with everything - notably pizza and ice cream - without any suffering.  And it was my wife, some 10+ years ago that set me down this *healthier eating* path.  Back then I had never even looked at a food label!

So am I on the brink of paying up for organic meat?  I don't think so.  While there's plenty of *meat* behind the food wackos arguments, in terms of toxic pesticides and whatnot, there's also a glaring lack of evidence.  They can prattle on about a single Mad Cow disease outbreak for years but I remain unmoved by the math, by too many standard deviations from the norm.

In a nutshell, that's how I felt about the book.  Pollan's book does a wonderful job of answering the *what* of "what are we eating?" but it doesn't do such a good job proving consequences or of telling us *why* and *how* processed, chemical-laden food is hurting us.  To his credit, he writes humbly and fully self-conscious - and only mentions the inanity of *global warming* three of four times.  As I said to my wife, "I can't hold that against him because 'the environment' gets plugged every 3 pages in a newspaper or magazine!"

I'm just not about to turn eating into a sacred ritual when I can purify myself in so many more pressing ways.  Pollan, from what I can tell, is a native Northeasterner (Long Island?) who has no religion in his life.  For these types, it's almost a 100% given that they will be drawn to eco-paganism, self-centered hedonism, money worship, or religious sports fanaticism.  It's simply human nature to NEED meaning in our lives.

When I first got this book my wife waxed skeptical - warning me not to go down this road; not to over-analyze the crap that I ate.

I snapped back somewhat indignantly at the woman who should know me better.  I told her the last thing I would ever be afraid of on this over-heated planet was *the truth*.  And I boldly asserted that there wasn't a better equipped person in this spontaneously-arisen-out-of-nothing(!) galaxy...to detect and defuse sophistry.
Posted by CaptiousNut at 1:57 AM

You don't have to buy into climate change or organics to decide that something might be wrong with the food most people eat. If you lock chickens up in cages, don't let them see the light, make them live in their own crap and that of the other chickens they are crammed into a cage with, inject them with hormones and anti-biotics to keep them from getting sick in these unnatural conditions, then you might guess that chicken might turn out badly. And if they are sickly and pumped up with chemicals, then that's what you are eating - sickly meat with chemicals, not to mention lots of hormones from being stressed out and out of balance.

Next up, try the movie Food Inc.

You could have used a little Latin to help scool us adults. In the last sentence you used the "out of nothing" phrase instead of the elegant Latin phrase
"ex nihlo"
See http://creation.com/latin-lapse
for more details.

One of the simple pleasures of living overseas is drinking Coca Cola that is sweetened by cane sugar instead of corn syrup. I remember hearing from an ex-girlfriend that in the U.S. Southwest is a great demand for "black market" Coca Cola with this formula that is smuggled over the border from Mexico. Who knew?

I don't know that I'm concerned about *stress levels*....

Though to your point, I knew that I never wanted to date those *stressed out* girls in college. THAT wasn't healthy!

I like to drink Coke Classic out of a can or a glass bottle. I dislike the fountain variety - you have to drink it too fast before the melting ice makes it even worse. I also do not like to drink out of those plastic bottles; it doesn't stay cold in them.

I think I would like to try the *real sugar* kind.

Don't have to go to Mexico. Perhaps I should put it on my wishlist a la Barry Ritholtz?

1. Coke without HFCS is carried at a fair number of stores, these days.
2. Your distinct lack of a scientific background, combined with ridiculously inadequate research, leave you totally unqualified to comment on matters of food and nutrition.
3. You are the absolute last person to be professing knowledge about either truth or sophistry - you suck up propaganda like a kid.

What propaganda have I sucked up? An example please.