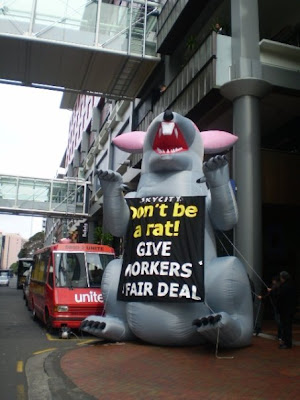 There's a great government watchdog website for the town of Hingham, Massachusetts.

The other day it aired the greivances of a Teamster sewer guy against his superiors:

Things came to a head in late 2006 when Commissioner Brandt discovered that a pair of new pumps had been placed at Walton Cove Station for installation and hadn't been installed for over a year. This caused Brandt to start investigating and he discovered that Rosano-Davis had been getting the bulk of the contracting, yet there was very little visible sign of any work being performed.
.
.
.
After a short time I began to notice some peculiarities in the Department. Supervisor Dow was rarely at work. He would however come in at night with various companies such as Rosano-Davis to perform inspections and cleanings of various stations and lines. When I asked if he needed help, the answer was always "no". He would also come in and take OT calls for what we call "nuisance" alarms. These alarms were usually resolved with a flick of a switch. This practice enabled Jim to accrue an immense amount of comp time every year. I believe more than the State Law allows. This practice continues to this day.

Once a week or so, he would have breakfast or lunch with Paul Davis (of Rosano-Davis!) or sometimes other contractors that the Town is supposed to have impartial business with.
.
.
.
I had several meetings with the Commission while I was Supervisor. At that time, Commissioner Salerno and I were on the same page. Our goal was to get the department running efficiently again.

While I was catching up on the work in the office, I received calls from various companies asking me to order various items, such as ice melt for instance. We had enough ice melt stored at the New Building behind the Fire Museum to melt the North Pole. In fact, the amount of ice melt that kept arriving previous to this particular phone call became a joke amongst the crew.

When I told the salesman; "No thanks" he said; "Why don't I sweeten the deal by giving you a free gift out of the Cabella's Catalog? You're still fishing, aren't you Jim?" I said; "This is Steve, and again, no thanks."

Hah! Rule 1 in the Handbook of Public Official Bribery....make sure you are paying off the right guy!

Every town in America ought to have a website like that - where people can drop a dime and shed some sunlight on otherwise unchecked public malfeasance.

Granted, at this point, with every level of government in the nation bankrupt three times over, they may not be able to make a difference. But hey, it's still good clean fun to trap exterminate weasels, rats, and other vermin who were bred, fattened, and abetted by Big Media's abject negligence. 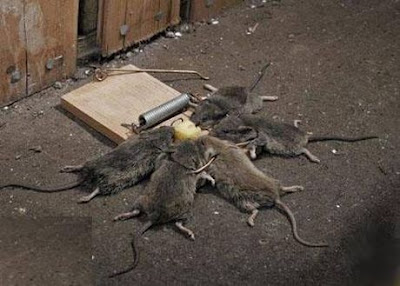 Posted by CaptiousNut at 3:22 PM

Q: What do we do to master thieves in this country?
A: Elect them to public office to "serve" the Greater Good!

Brett Gyllenskog is a violent psychopath!