So who's the new pink-o-phile?

Well, I espied Sven in downtown Southampton, NY this weekend.

The freakin' guy had (to go with his vertebrae-displacing side-part) the words "Hello Kitty" painted on the pink bike!

And don't think for a second he just borrowed his sister's bike to ride into town to grab a mineral water or a vegan smoothie.

NO. He was with one of his buddies - a guy who also was riding a very similar *pretty* bike. By that and the manner of their sidewalk flouncing, it was clear that these HJs were riding their very own, beautified vehicles! 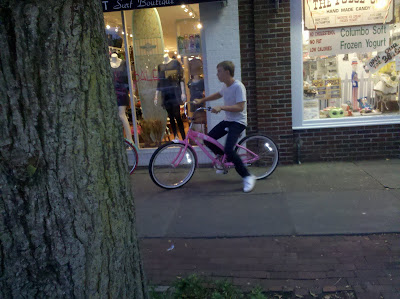 So the guy(?) goes past me for the first time and right past my wife up the street. Mrs. C-Nut comes running back, "Did you see that @sshole?...Get your camera out!"

If you recall from that prior post, she wasn't exactly on my side when I was snapping pics of that deranged goofball wearing pink pants.

You see, when she's sober, it's clear how RIGHT I am!

The camera was already out...

And, as I photo stalked him up the sidewalk, we both enjoyed a big deja vu laugh.

My bad, I really should have *engaged* the dude. I'm actually a very good on-the-spot interviewer.  It's just that, I guess, I was still shell-shocked from that cop harassing me last time.
Posted by CaptiousNut at 3:06 PM