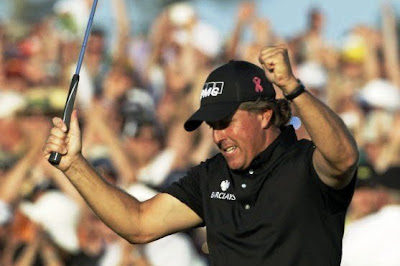 SHEBOYGAN, Wis. -- Forget chasing the No. 1 ranking. Phil Mickelson was more worried about being able to get out of bed.

Mickelson revealed Tuesday he has psoriatic arthritis, which causes his immune system to attack his joints and tendons and produced such intense pain he couldn't walk. He noticed the first symptoms five days before the U.S. Open, and the pain eventually got so bad he made a visit to the Mayo Clinic.

Weekly shots have brought the disease under control, and Mickelson said there shouldn't be any negative impact on his long- or even short-term health.

"I'm surprised at how quickly it's gone away and how quickly it's been able to be managed and controlled," he said. "I feel 100 percent, like I say. But when I'm laying there on the couch and I can't move, you know, yeah, I had some concerns. But I feel a lot better now."

As if that bombshell wasn't enough for the day, Lefty dropped another one: The burger connoisseur is now a vegetarian.

"I know, I know," he said as reporters laughed. "As long as I believe that there's a possibility that it will help me overall, yeah, I'll continue to do that. If it will somehow keep this in remission or stop it from coming back, yeah, I'll be able to do it. But I haven't been put it to the real test. The real test is driving by a Five Guys and not stopping."

Yeah, it's not the can't-even-move arthritis that's sealed his fate....it's the ill-advised VEGANISM!

Tiger Woods tried to quit whoring around - and that didn't work.

And once, my wife made me quit making *negative* remarks for an evening - boy did I turn into a dullard!

See also - On Vegetarians - which has a link to the story of Prince Fielder, a baseballer who gave up meat and lost all his hitting power!
Posted by CaptiousNut at 8:24 PM