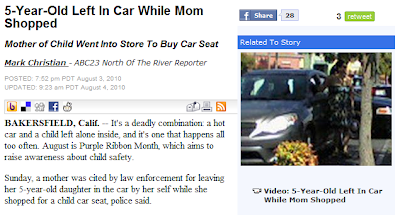 The best from that article is the unblinking *alarmism*:


"I can't believe she was shopping for a child car seat when she left her baby in the car. How someone could leave their child by themselves in a car now days? I saw the girl by herself until the police arrived. Forget about the heat for a minute, what if a child molester were to happen upon the little girl by herself in the car?" said the witness who wanted to remain anonymous.

According to statics, this happens far too often, and experts said the dangers of leaving a child unattended in a car can at the very least be harmful if not deadly.

Whether it's from gear-shifted crashes, sweltering temperatures, locking parents out of a car, trunk entrapments, or playing with windows and getting limbs (or necks even) caught, horrific accidents can and do happen in a blink of an eye, experts said.

"Kids have engaged cars, have been strangled by their car seats and cars have been stolen with kids in them", said Elena Acosta of Kern County Department Of Human Services.

Purple Ribbon Month was started because a 6-month-old girl named Kaitlyn died while left unattended in her babysitter's van. Kaitlyn's Law, became effective in 2002 making it a citable offense to leave a child under 6 years of age unattended in a motor vehicle without the supervision of someone at least 12 years of age.

What a bunch of BS, from those experts!

Just imagine the tragedy of a parent being *locked outside the car*...

Recently a friend of mine up North emailed to tell me that he was cited by the Hingham Police for leaving his nearly 6 year old son in the car outside of a store while he ran in to grab a soft drink. I believe it was some 'old coot' in the parking lot who called the cops the second my buddy jumped out of the car.

This is a practice I indulge in all the time. As to getting ratted out, I was once warned by a cashier at the Hilltop Butcher Shop in Weymouth, MA that they have had customers get similarly cited.

What was somewhat funny about my friend is that he got caught before me. Of course, though, I only leave the kids in the car when I can see them at all times from the store. AND I always do a scan of the parking lot when I jump out to make sure there are no cops nearby or other busybody types. Tinted windows are your ally!

My latest thing I do is bring my kids to the driving range. I put a DVD on and leave them in the car some 80 yards away while I chip away at my 40,000 practice balls. In fact, my kids are so TV/movie starved that my daughter is always asking me, "Dad, can you go hit balls?" How's that for a perfect little girl?!

That Boston friend did receive a follow-up visit from some government official. They came to his house to investigate! Luckily, the bureaucrat did not give him a hard time at all; he even confessed that the law was really for people who leave their kid in the car all day while they hit the slot machines and whatnot; or go to a crack house. It definitely could have been a lot more painful, say if he were in California, judging by the appalling tenor of that article.

Y'all should see me at the mall. My kids are always running pretty darn far ahead of me. And as they zoom past other people, invariably some of them start looking all around, palpably distressed, for evidence of a nearby parent. I keep sauntering towards these Morons - who never do they ever look in the direction from whence the brats came! - and try to convey to them, politely, my best MYFB glare. They most certainly ARE NOT genuinely concerned about the kids. No, they are steeped in self-righteousness as to how others should parent THEIR OWN brood.
Posted by CaptiousNut at 10:41 PM

I am curious how you reconcile letting your kids "do their thing" with your post that one of them nearly drowned some years ago due to your admitted inattention.

I know this comes off as a "ball-busting" post; I won't say "I don't intend that" to get myself off the hook in that regard.

Just wanting your perspective about that. I don't have kids and therefore cannot criticize parents of any capability. I do think your mindful readers might see some incongruity and might want a response from you.

Overall, no one watches their kids more closely than I do. I'm a real hawk who's constantly receiving *remarks* from other family members to "ease up".

When my daughter was *submerged*....I was right there, only about 15 feet away, facing her. I was just caught up in a stupid conversation for an instant. That could happen to anyone - and has, ask around.

Put it this way, I don't send my kids to school/daycare or use babysitters/nannies. So compared to 98% of others, I am necessarily watching my kids a whole lot more closely than most everyone else. There's no comparison, really.

My story is somewhat different situation than your post but after going thru this it has changes my perspective on kids in cars. My 5 year old nephew climbed in an unlocked car in August of 2008. He was walking about 200 feet from the shop where his dad worked over to the house were his mom was with the other kids and stopped to get into and check out a new car his uncle bought. He was only in it about 20 minutes before someone found him. He had already died from the heat. Needless to say my car is always locked now. Ain't no kid climbing in it on a summer day. He was tired, it was in the afternoon. He probably fell asleep and his body just shut down. If I would see an unattended kid in a car first thing I'd do is check if the a/c is on and if not I would be breaking windows.
So the story is not total alarmism.

So sorry to hear about your nephew.

Thanks for your response. Based on my reading of your blog for several years, it appears you are one of the most attentive parents I know--so attentive to educate them yourself. That's a sacrifice few make ...

Again, I won't attempt to take myself off the hook here with my prior accostive message. Your response was well measured--and I get your point.

Regards to the C's,