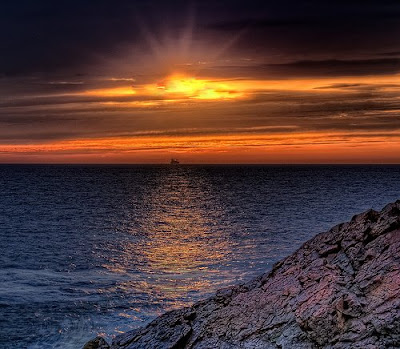 So I was hunkered down working on my grandmother's eulogy late last week. Only a Moron would not utilize the internet for help as there's a wealth of resources available.

I found one website - click here - that was actually a forum. People wrote in saying things like, "Hi, my uncle just died....he was a carpenter and liked to fart....can you help me with his eulogy?"

And some chick there, "Amy", would thoughtfully respond and offer up the *perfect* poem for the eulogy. Either she was getting paid or is just the nicest person in the world because she must have answered 50 different people on that site.

Anyway, I came across a poem there that was, well, suitable for most funerals, but especially *perfect* for my grandmother. Here it is, The Ship by Bishop Brent:

A ship sails and I stand watching till she fades on the horizon and someone at my side says She is gone.

Gone where? Gone from my sight, that is all. She is just as large now as when I last saw her. Her diminished size and total loss from my sight is in me, not in her.

And just at the moment when someone at my side says she is gone there are others who are watching her coming over their horizon and other voices take up a glad shout. There she comes!

That is what dying is. An horizon and just the limit of our sight.

Lift us up, Oh Lord, that we may see further.

I figured I'd use it to close my grandmother's eulogy, and there it sat, at the bottom of my fourth page.

Now, this was a Catholic funeral replete with a full mass. The priest actually gave a beautiful homily(sermon) but as he was wrapping it up, he mentioned that there is a great consolatory poem to help us understand death.

My heart slowed down a bit.

He said it was a about a ship.

I seriously wanted to stand up and give him the cut-off sign, but refrained.

Then I had to listen to him read the entire poem that I was depending on. 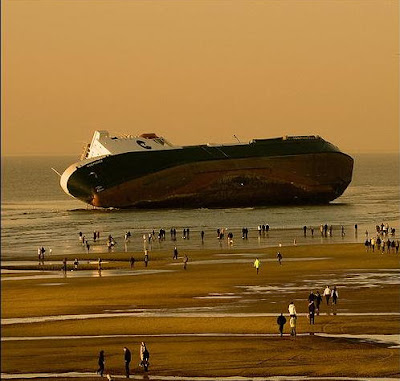 The worst part was that for the next fifteen torturesome minutes, between my throbbing back, sweating my balls off, and trying to harness my two disruptive brats, that I had to re-figure out how to end my speech.

The whole point of writing it out beforehand is that one can defeat the nerves and emotions and just robotically deliver it. Now, I was a bit flummoxed.

Anyway, everything worked out. The priest mis-remembered and mis-cited the poem a bit; I made a joke of it; and delivered the accurate (I think) version anyway. Plus, I had plenty of other material and really could have omitted it altogether.

I thought it was sufficiently hard to compose my speech as it was. I certainly didn't plan on having a back-up poem - which is what my advice would be to anyone else confronted with this task. A speaker simply never knows what's going to be said right before they get the microphone.

In fact, this happened to me back in 9th grade. We were doing oral presentations in history class and some kid in front of me overstepped his subject and said everything I was about to. [I reckon it was about Cortes and the Aztecs.]

And, I was at a wedding some five years ago where the maid-of-honor (English major at Brown) got up first and gave such an unbelievable *toast*, that the best man, a total meathead who was sitting right next to me, cancelled his entire speech because it would have, well, most likely seem a joke in comparison. [They are happily divorced now.]

Getting back to eulogies - I think if one is short on material or happy memories, a poem is good *filler*. I actually had the opposite problem with my grandmother. There was way too much material, so much so that my main problem was cutting it down and tying it together.

There's another poem out there that everyone's using, it's called The Dash. It's a little trite, but still quite usable.
Posted by CaptiousNut at 8:48 PM

Email ThisBlogThis!Share to TwitterShare to FacebookShare to Pinterest
Labels: death

I delivered the Eulogy for my Gramma (we adored each other) last January in front of State Senators, Mayors, many elected and business leaders, you get the picture. Hundreds of people. I think did not shame her.

I'm sure you did your Gramma proud, youngster.

I received lots of compliments but they were from biased family members - who may have had very low expectations! I'll never know how I really did by my own standards. Suffice to say, I didn't embarrass anyone.

For a minute I thought about posting my eulogy *redacted* but probably won't do that. This weekend wasn't at all about me.