Why Buy The Boston Globe?

When you can self-induce vomiting, with a finger, FOR FREE???!!! 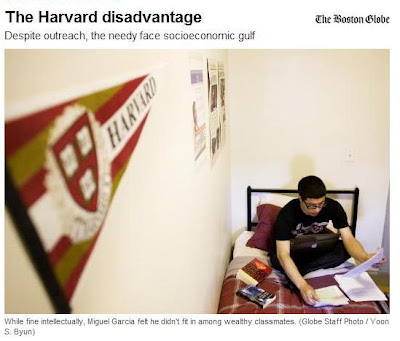 The gist is that we're all supposed to feel bad for a kid on full boat to Harvard....because other students there may be wealthier.

This Miguel Garcia was perturbed by his classmates who allegedly were dropped off by chauffeurs, own tuxedos, and can afford to outsource their laundry!

The Globe also bemoans a kid who *chose to spend the week earning $11 an hour scrubbing toilets in Harvard dorms.*

I leave y'all with the money quote from a dean of admissions and financial aid:

"The stakes are high here," Fitzsimmons said in an interview. "If we aren't educating the full range of the population, we won't be educating effective future leaders of the country."

That's just what we need.... *future leaders* mired in low self-esteem and boiling with envy . Miguel Garcia gets handed a $200,000+ education and expresses his gratitude by demanding a driver and turn-down service. This fool, along with the Moronic Boston Globe, have no idea that the parents of those strutting rich kids are the ones actually paying his fare.

The Boston Globe may be down but it's not out. It'll continue inverting the truth until its last breath.

And, not for nothing....but I went to a school (UPenn) that had to be at least if not wealthier than Harvard. Even though I was from a typical 2-government-worker family in Worcester, MA, a town whose average household gross today is around $40,000 per year....In 3.5 years of school, I never once felt subordinate to my classmates from the Main Line and Westchester County.

In fact I worked for nearly 40 hours per week - albeit at $5-6 per hour, not the $11 for Harvard's (unionized?) toilet scrubber - and had plenty of money in my pocket to do with what I wanted.

And truth be told, I looked down upon, and felt pity for many of my über-wealthy classmates. They lagged me in the classroom; were socially maladroit, unathletic, lazy, and at least a few of them I knew were serial, incorrigible masturbaters.

The way I saw it, despite all their *privilege* thus far, the fact that I was in the same place as them at the moment made me the winner and them the losers!
Posted by CaptiousNut at 11:05 AM

You say, "serial, incorrigible masturbaters" like it's a bad thing. Did you really want those folks spawning?

Do you have a problem with "serial, incorrigible masturbaters," C? You do realize they make up over half your audience!

One guy's door was always latched.

Not locked, but latched. And there were no women in his life (or men, for that matter).

His family had shopping malls on one side and on the other side, they invented one of the most popular cleaning supplies on the planet.

And his dorm room really smelled.

But at least we got to use his family's rather lush condo in Florida for Spring Break!

If deep down Miguel Garcia feels like he should be scrubbing rich kids' toilets....then that's probably his due destiny.