A food services manager at a Newton elementary school said she was suspended this week for feeding students other items after they refused to eat the day's veggie burgers for lunch.

Kathleen Cunningham said she was suspended for an incident that occurred May 4, when Angier Elementary School received veggie burgers instead of the grilled cheese sandwiches that were on the menu.

When about seven or eight students refused to eat the veggie burgers, she said, she let them choose other lunch items, including a bagel lunch or a breakfast lunch.

"Morally, can I let a kid go without a lunch when he’s telling me he’s not going to eat?"

Here's another distressing excerpt from that article:

Faced with an expected deficit of nearly $1 million in food services next year, the Newton School Committee is considering whether to privatize the breakfast and lunch program — a possibility that has the roiled relations with the schools’ roughly 90 food service employees and their union.

I find it hard to believe that a town's school system could have 90 unionized lunch ladies.

And I find it hard to believe the school's *food service* could run a $1 million annual deficit!

Newton, Massachusetts is one of the wealthiest towns up here. Parts of the town average, AVERAGE, $200,000 in household income.

Exactly why can't the kids bring their own lunches and they just sell drinks from vending machines?

Everything about the *schools* has long since passed the point of inanity. 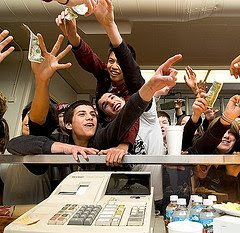 The lunch ladies always were crazy.

Before I went to a *magnet* elementary school, I attended the neighborhood one (through second grade).

The cafeteria was run by a handful of *lunch ladies* so there were no teachers present. After eating, they made us line up at the door to go to recess. BUT, we most certainly were not allowed to put our coats on until we got outside.

If they espied any renegade grade-schooler who prematurely put their jacket on.....they'd go ballistic and scream, "TAKE YOUR COAT OFF....IF YOU PUT YOUR COAT ON BEFORE YOU GO OUT YOU WILL CATCH A COLD!!!"

Surely, if there were a pool outside, these 'old bags' would make us wait 30 minutes after lunch before we went swimming.
Posted by CaptiousNut at 7:52 PM

In case you missed this op-ed in the WSJ...

The WSJ should do more reporting about the changing demographics and the drunken sailor like spending coming out of Concord.
Kfell