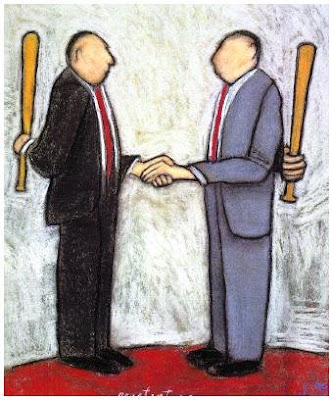 First of all, a full five months before our lease was set to expire this year (end of July), the Moron asked us to renew.

We told him we'd get back to him a few months. Why the bleep would we renew 5 months early, at that price?

So a couple of weeks ago, less than three months before lease expiry, we told him we'd renew but only at the same $2,500. He verbally acceded that point but informed us he wanted to "sell the house".

First of all, the house isn't his to sell. The banks own it and it's worth less than half of the outstanding debt of $1.2 million.

I asked, "What are you going to list it at?", and got no answer.

He answered negatively. Later on, after more badgering he said he was going to sell it in the 700s.

Okay, he had this for sale at 700k 3 years ago and it wouldn't move. But today, 3 years from the *peak*, he thinks it's going to fetch that number?

But again, it's not his house to sell. Even if some other Moron offered him 700k or even a tad more for it, the Moronic banks would in all likelihood decline the sale. I believe that 85% of all agreed-upon short sales are being rejected by lenders today.

So our dim-witted landlord asked if we can renew at $2,500 but go *month-to-month* to aid his *selling*.

Sure, idiot. He said he'd draw up the lease. Now, here we are three weeks later and the lease is nowhere in sight. Furhermore, the jerk walks by us without even mentioning it. Clearly, something shady is afoot.

Between our *last month and security deposit* this buffoon has 5k of my money - or, he had it anyway. I'm sure the money is long gone.

June 1st is just around the corner so that means there's only two months left on our legal lease. Without another lease, I have to assume he's going to try to boot us out on August 1st - so why would I pay any rent next month when as far as I'm concerned, I already paid my final two months? Fireworks could be early this year - as this coked-up mofo is one volatile dude! [As am I.]

There was another side issue in our lease discussions. For the past two years, this clown used to bring over his riding-lawnmower to help with our enormous lawn. But this year, the idiot wouldn't bring it over. He said it was broken - which I half believed. Regardless, he can't be changing the terms of our relationship, lowering his level of service, and at the same time be demanding a rent increase.

I couldn't take this uncertaintly about the grass anymore. We told him that if he kept the rent where it was, and renewed the lease of course, that we'd go buy a lawnmower and whatnot and unburden him of helping.

So I went out and bought a mower and weed-whacker for $700+ which I very well might have to resell at a loss in two months if I move out to a smaller place. 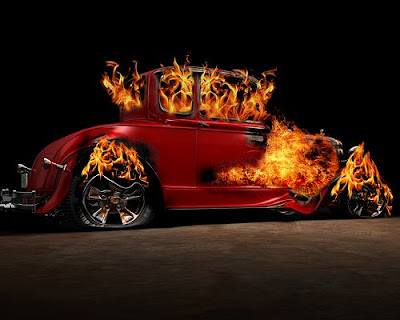 Tonight, while my homeschooled kids ran around the house completely unsupervised, I was toiling with the grass. Up into the driveway pulled my landlord in some souped-up hot rod convertible. He bought it last year for ten grand or so at a police auction; promptly showed it off to the entire town; then on day two, it just about blew up. He brought it to the local mechanic where it caught fire again. The mechanic got pissed and told the Moron to *get the effin' car out of his lot* - which he did.

So my landlord must have made a few grand or something recently because he pulled the time bomb out of his garage for a cruise on this beautiful day. He must have found some other mechanic willing to take his money in exchange for grease monkey quackery.

As knucklehead pulled into the driveway, I noticed that he had a new *woman* with him who was accompanied by a small child. I forgot to mention that my landlord's long-time live-in chick ran out on him this winter. Who could blame her for abandoning a bankrupt, melting-down, lying crook?

But today I saw his new squeeze for the first time. Clearly, he was trying to impress this ghetto ho and her illegitimate child with the hot rod. I chuckled to myself as I instantly digested all this incoming data. Marching my lawnmower onward I said, "Whatever, that car's going to blow up again anyway!"

Sure enough, not fifteen minutes later, smoke came pouring out of the idling engine. Some fluids were streaming onto the driveway; and Moron had to evacuate his ho and her kid from the scene. He went running to his cell phone and started yelling at no doubt the quack mechanic who just *fixed* the vehicle.

Right now the car is sitting right behind me and my wife's cars with its hood up. I would like nothing more than for him to take off so I could snap that pic for y'all!

Then, as the fire simmered, he walked the broad all over our property for a full tour (of the bank's house!). He took her down the the back woods and kept pointing at this and that. No doubt he was telling her about how he was going to *subdivide* and *build a new house* back there. I heard the same fantasy two years ago when I first met him.

But I'll bet the ho was more impressed than I was - that is, if she couldn't see through the *hot* hot rod and his steaming BS.

[Note that WaMu, GMAC, or Countrywide, gave this idiot a $600,000 cash-out refi on this property based upon his grand plans to subdivide and *build* in the back. But there was never a permit for his plans. Not even close as the lot didn't have near the requisite frontage for such an undertaking. Whatever bank it was gave him all that cash when the project never had a chance in hell! Can you say *due diligence*?]

[All told, this clown has $4 million in mortgage debt and no savings or income. And he's got some balls to be lying so much on a first date!]

The Art Of Real Estate Self-Defense

My Landlord Is Still Dumb

Do A Credit Check On Your Landlord
Posted by CaptiousNut at 9:25 PM

I believe legally in MA, your security deposit is supposed to be in a separate bank account. You are also allowed to collect the interest on YOUR money. I might ask to see the bank statement

I am betting CT has the same security deposit rules. Here it has to be in a separate escrow account only if you have more than a certain number of tenants-10 or something. But you are still due the interest.

Here's how you make all of your troubles go away. This is what you do: go to craigslist and get some chick who will go out with just about anyone, slip a few bucks and send her out with your landlord and tell her act like he's amazing. Bam - problem gone. Sounds like the dude needs to get some action and my guess is that if you can alleviate that you'd be in-like-Flynn.

You are indeed correct. I discovered that several months ago.

See - The Art Of Real Estate Self-DefenseI've been holding off on throwing that *leverage* at him until the very end. It's tricky, my situation because we love the house and are angling to stay in it for as long as absolutely possible.

Also, the dude is essentially bankrupt so I expect him to at some point to formally declare personal bankruptcy. What I'd rather do is just linger here for a few months without paying anything at all.