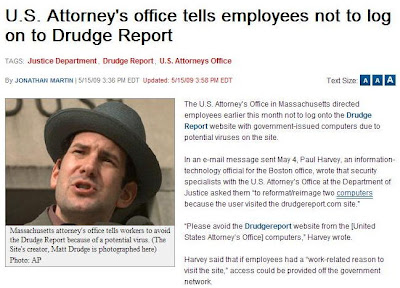 The U.S. Attorney’s Office in Massachusetts directed employees earlier this month not to log onto the Drudge Report website with government-issued computers due to potential viruses on the site.

In an e-mail message sent May 4, Paul Harvey, an information-technology official for the Boston office, wrote that security specialists with the U.S. Attorney’s Office at the Department of Justice asked them "to reformat/reimage two computers because the user visited the drudgereport.com site."


Alright, I admit I stole that line from the comments of the article.

By the way, Drudge just links to other, mostly major media outlets.

Ergo, censoring him out is pretty darn totalitarian.
Posted by CaptiousNut at 5:35 PM