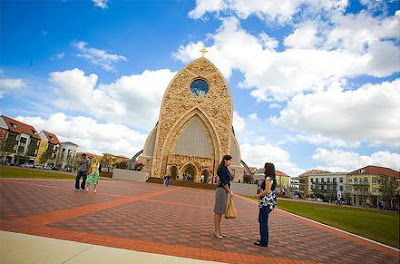 Ave Maria is a new planned community just northeast of Naples, Florida. It's been designed and built by centi-millionaire Tom Monaghan, the founder of Domino's Pizza.

It's to be a Roman Catholic town centered around, well, the church, and a new Catholic university. I actually drove out to visit it while I was snowbirding in January - and was quite impressed. The facilities are tremendous as were the people we bumped into. I've got to tell you, it's not often I meet college kids that resemble what 19 year olds used to resemble over the past few millenia....i.e. YOUNG ADULTS. A few stopped to talk to my kids, offered to take pictures of us, and showed us around. I was there with my MIL and we both thought the exact same thing, "This is where her granddaughters ought to go college to meet their husbands!"

Anyway, don't you think a town of such explicit purpose would invite the usual Commi-pagan critics?

Of course it would!

The local Naples paper or news *site*, whatever it is has recently been running this: 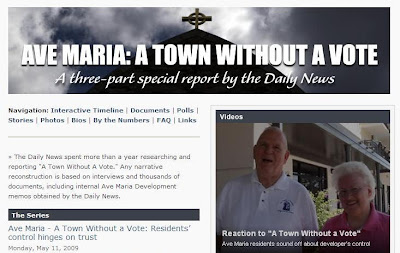 First off, anytime a paper runs a multi-part special report, you can be sure journalism has been subordinated to a political agenda. For example, the most recent *multi-part* special I came across was the Boston Globe's six-part hagiography of bunghole Ted Kennedy.

The Ave Maria smear goes like this....apparently, when the town was founded, the developer WHO RISKED MILLIONS OF HIS OWN HARD EARNED MONEY used the normal legal avenues to maintain political control over what he was building. In other words, he set the municipality up so that he and his builder would essentially have voting precedence over any or all of the other elected officials. The Naples paper is trying to make this into a story when none exists at all. They are running around frantically trying to make residents apoplectic that *their votes don't count*....that this is an un-Constitutional disenfranchisement of residents....and that homebuyers down there weren't sufficiently disclosed to. Yet the paper can't really find anyone living there who's upset. All they can muster is some critical law professor who lives hundreds of miles away.

If you look more closely at that last pic (click on it), there's a video clip in the lower righthand corner subtitled,

"REACTION to 'A TOWN WITHOUT A VOTE' - Ave Maria residents sound off about developer's control".

Yet when you watch the video, click here, the only thing they sounded off on was the newspaper's insinuations and distortion!

You can read the articles:

Ave Maria - A Town Without a Vote: Developer keeping score on its ability to rule town

Ave Maria - A Town Without a Vote: Taxation without representation?

Ave Maria - A Town Without a Vote: Residents' control hinges on trust

Or you can get a primer from watching this video of the reporter discussing this manufactured story that he *spent 1.5 years on*!

The fact is, a developer has to maintain control when building an extensive project. If he doesn't, it mightn't fulfill his orginal design ambitions. For example, if the Domino's tycoon allowed others to interfere with his plans, say the co-ideologues of Naples News, he could end up with all his municipal workers UNIONIZED and DEMANDING PENSIONS....which would eventually bankrupt his town, just as they have every other one in America. Would you risk/spend your life's savings to build something only to leave it vulnerable to pagan statists?

I sure as heck wouldn't.

I don't *know* that Tom Monaghan was specifically scared of unions when his development team established what every other large developer did in terms of legal and economic self-protection....but I'm certain he should have been.

You see, as a nation we are trapped in ubiquitous statism. No town in Massachusetts, my home state, or probably any other state could ever just say, "You know what, we are going to do away with unions and pensions for municipal workers" or "We are going to close down all of our public schools...." There are laws codified against that. AND, loopholes would be closed via extortion. The state would revoke highway funds and whatnot for any little district that didn't *play ball*. Read John Taylor Gatto's - The Logical Tragedy Of Benson, Vermont to see a case study of institutionalized thuggery.

Okay. So our entire country is mired in overlapping local, state, and federal socialism. The only cure, the only real hope against a thuggish monopoly is innovation. People need to be able to move on and build completely different communities. That is arguably what Ave Maria is all about. It's opting out of what hasn't worked - at least from the standpoint of its residents.

This is why Ave Maria is and will always be in the sights of the Moronic, pagan statists.

Now my good friend who lives down in Naples, he visited Ave Maria shortly after I did. He said that there he saw a large mixed-age group of kids playing soccer; and then, when they were done, they sat down to eat a conspicuously civilized lunch. Short on articulation, my witness said it was truly a sight to behold.

Mind you, my buddy was raised Catholic (I think) and has since gone evangelical Christian with a tinge of anti-Catholicism (like all of dem' Protestants!). So I deem his favorable impression to be noteworthy.

[In fairness, what he saw was probably independent of Ave Maria. I think he just bumped into the homeschooling group. I took my kids out with a local homeschooling group yesterday and the entire time my 4.5 year old son was *socializing* with 11 and 12 year olds who didn't mind his company one bit. Meanwhile, the government-schooled 6 year olds we usually see more often than not rebuff his overtures!]

Most people buy a vacation home for *pleasure* - a condo at the beach, a ski lodge, or a timeshare. After all, they need a respite from their thoroughly unsatisfying wage slavery.

But after visiting Ave Maria, I thought, why not buy a place there? Why not buy a second home in a place that could behoove my family morally? I am raising kids whose entire development is in my hands; AND it's a task I take most seriously. I submit it's extremely healthy, for all of us, to be around as many grounded people as we can in lieu of our idiot neighbors.

PLUS, Ave Maria has a decent golf course, it's still sunny Florida, and less than an hour from the beach! 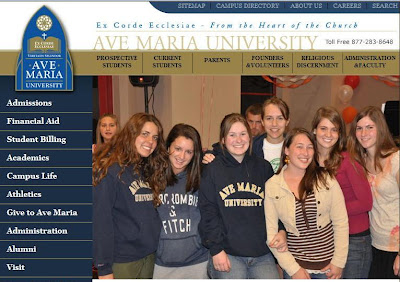 If my son ends up marrying some Masshole chick with *like* 1,000 friends on Facebook, zero independently-arrived-at opinions, and one of those ridiculous pink Red Sox hats instead of say, someone like these marketable broads above....

I'll have failed as a parent - no matter how fluent my son is at trignometry or how versed I've made him in world history.

I'm almost 35 now; we're a bit past the six-weddings-to-attend-each-year stage.

All we hear about now are tragic divorces.
Posted by CaptiousNut at 9:32 PM

You are headed for Pain City, youngster.

Are you *shorting* my kids' spousal selections?

Who says they'll even get to choose?

If the Islamists pull us all back into the 7th century....on the plus side will be the return to arranged marriages.

I'm way long your kids spousal choices...and equally certain you will be disappointed absent a shift in expectations.