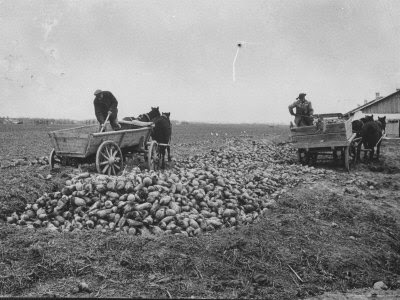 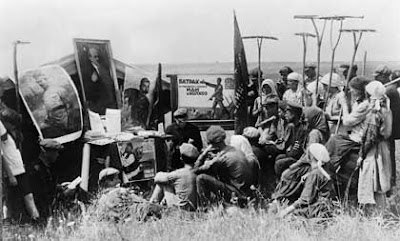 I was speaking with my 95.5 year old grandfather the other day about Ukraine - the birthplace of his mother.

Although the whole conversation was extremely interesting in its own right, I just want to highlight one particular statement he made. You'll have to imagine a nonagenarian with a thick Polish accent:

You know they had that collective farming where the Soviets took all the crop [sic] and only gave back to the workers the little bit that they thought they needed....lots of people starved to death.

Hmmmm. Big Government confiscates the harvest and then metes it back out to the producers at its whim....

Well it should. It's been a while since I had to formally study history so I hadn't thought much about collective farming recently. Read Wikipedia for a refresher.

Though, you might want to skip the Wiki entry on Agriculture in the Soviet Union because it fails to mention the following: 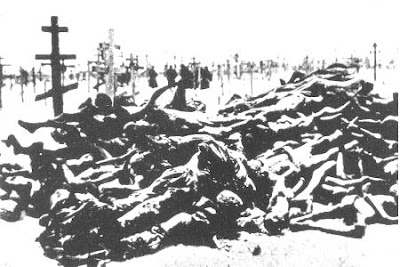 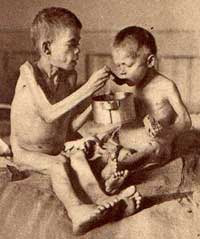 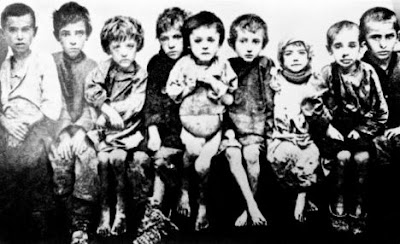 And, of course, it has the obligatory American college professor, a nobody, from a nothing school, offer up a defense of a system that starved millions:

Economist Joseph E. Medley of the University of Southern Maine, US, while admitting to some inefficiency in Soviet agriculture, denounces the "myths" of failure propounded by Western critics. [3] He believes it to be ideological in nature and emphasises "[t]he possibility that socialized agriculture may be able to make valuable contributions to improving human welfare".

Think about that post I recently wrote about how the State of California has to lie prostrate before the Obama Administration to get back some of its OWN MONEY. Read - Federal Slavery, if you haven't already.

And compare what Stalin did to Ukrainian farmers with what goes on within your state. If you live anywhere like my current home of Massachusetts, you no doubt hear every state issue framed in terms of its impact on *local aid*. In other words, every proposed tax cut is batted away by politicians threatening to reduce the morsels RETURNED to the residents of cities and towns.

In fact, one of the reasons Mass Morons give for having voted to TAX THEMSELVES this past election is that...."our schools and libraries would have gotten hammered."

For context on that graphic, see - Massachusetts - More Morons Than Your State!

While, the New Old Collectivism bears great similarity to collective farming - Big Government procures everyone's fiat wages (in lieu of the *output*) and it metes out far less than it steals....

But the modern wrinkle is this - Big Government may give back SOME of the loot to its rightful owners, but it only does so with serious, totalitarian strings attached like: seat belt laws, affirmative action, financial regulation, special education mandates, etc. If you are a municipality or a *rogue state*....just go on and try to flout the Feds on a particular issue. You'll find the spigot turned off....I mean you'll find your tax REBATE slashed big time.
Posted by CaptiousNut at 10:26 PM

Great post, it amazes me that there are still academic types defending communism. I guess that they would gain prestige under such a system: why else would they promote it?

I know, that's the frustrating part - socialism has proved a failure but we are still stuck with it.

At least Stalin could say he was somewhat of an *innovator*. Abject, willful ignorance is the only excuse for today's *collectivist* apologists.

You left out the part of the quote mentioning that 20 percent of the land, not 4 percent (whhich does not cover the pasturage land) was private property, and that private produce focused on high cost non-essentials, such as flowers, some fruits, etc., the great bulk of produce being wheat, flax, etc.

The USSR produced more grain than Canada in its history. Your granddad had some hard times. In the Collectivation campaign, the Ukrainian peasants ate their herds or decided not to produce crops as a protest to forced collectivation. Whether communication did not come to the top or the top of the state wanted to break the peasants no one knoews, but quotas were kept and 3 million peasants died in the entire country, with most in Ukraine.

P.S. your photos are from the 1921 famine in Russia during the Civil War.