Movie Rec - The Lives Of Others

Below is a clip of the opening scene. As the trailer conveys, this film is a study in the totalitarian statism of East Germany; it's about the secret police, government surveillance, and the chilling toll they take on the sheeple.

Watch closely again the scary scene that begins at 2:55. Did you catch how the professor reacted to the inquiring student?

The movie won an Academy Award or two, and, according to Wikipedia, the *snitching* storyline has a rough personal basis in fact for the writer/director.

I give it 3.75 out of 5 stars - only because the third quarter of the film slowed down a bit.

And imdb.com has it rated pretty highly: 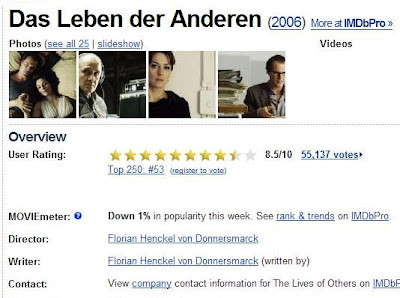 One would have to think the main reason Hollywood (i.e. the Academy) loved this movie so much is that it glorified artists and villified censorship, no?

Yet these same self-unconscious airheads in California go on and practice their very own, much subtler, art of propaganda, persecution, and censorship!
Posted by CaptiousNut at 1:47 PM

Saw it and enjoyed it.