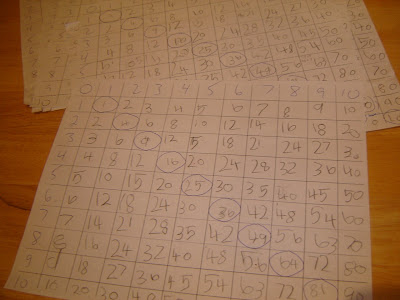 Having exhausted the Kumon books on the lower level, I've had to create my own math *work* for Prince C-Nut.

One thing I have him do each day is fill out a blank multiplication table.

I would say this task is the perfect blend of addition and multiplication. And, more importantly, it really drives home the relationships between the numbers.

You see, when the kids start out, numbers are complete abstractions. 72 is simply the number that they are conditioned to believe comes after 71 and before 73.

But now my son also sees 72 as *8 nines* and *9 eights* - and he knows it's nestled between two *perfect squares* on the chart. Yeah, 4.5 year olds can certainly digest the concept of squared numbers so it need not be delayed until, what, 5th grade or higher?

In filling out these tables there are no rules. He can start wherever he wants so long as he finishes - which only takes about 5 minutes now. And it's been unbelievable to witness his daily progress; it's been amazing to see him grasp the symmetry of the table, that he can deduce "42" from both adding 6 or adding 7 to an adjacent box,....

And yesterday, when he eagerly asked me to extend the table to 11, 12, and higher I was not only excited and proud, but fully satisfied that I've imbued him with genuine curiosity - because that's the extent of a teacher's job.

This is no exagerration whatsoever, but when my son takes a leap with his *work* I get a full-fledged adrenaline rush.

Yeah, it's about equal to the feeling of a great round of golf!
Posted by CaptiousNut at 10:32 PM

Hi C
Very admirable indeed !
My niece learned some good concepts with Vedic Mathematics and she could do add, subtract, and multiply, square root multi-digit numbers (the number of digits didn't really matter)
And the best part, these concepts stay with you for ever !
Good luck with your son :-)

Thanks. And thanks for informing me about Vedic math. I just wrote a post on it!