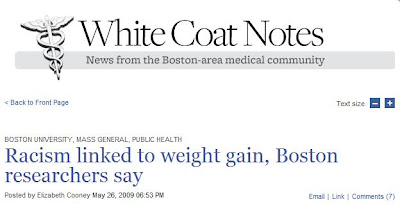 Perceptions of racism -- from being treated with suspicion in a store to unfairness in employment or housing -- can heighten stress levels and affect health, research has shown. A new study from Boston University links these smoldering signs of racism to weight gain in black women, suggesting a possible explanation for the their higher obesity rates compared to white women.

Yvette Cozier, an epidemiologist at the Slone Epidemiology Center at BU, led a survey of more than 43,000 women enrolled in the long-running Black Women's Health Study. Writing in the June issue of Annals of Epidemiology, she and her co-authors describe participants' reports on their weight, body mass index, and perceptions of racism.

At the beginning of the eight-year study, the women were asked if they sometimes felt they were treated poorly in a restaurant or store, whether they thought people considered them dishonest or less intelligent, and if they had felt unfairness on the job, in housing, or from police. The women, 21 to 69 years old at the study's outset, were placed in four groups based on how frequently they said they experienced these signs of racism. Their weight was recorded every two years from 1997 through 2005. Their waist circumference was measured at the beginning and end.

At the end of the trial, all the women had gained weight. But the women who said they felt higher levels of racism gained more weight and had bigger waist-size increases compared to the women who felt the least racism. That held true after accounting for factors such as education, geographic region, and beginning body mass index.

"Racism is real and it has real effects," Cozier said in an interview. "It can result in real changes in the body."

Here's the link to the Boston Globe(Who else?!) article.

This is sooooo Boston 2009!....everything from the 43,000 person *study* - no doubt funded by taxpayers, to the quack science, to the eager dissemination by the apparatchik Boston Globe.

It should give pause to anyone about to spend 200k on Boston University tuition anyway.

And great, because of crap like this, every future historian will mock the time and place of my worthless life - as they rightfully should.
Posted by CaptiousNut at 9:56 PM

Was there a question on that survey to determine the frequency of participation to the $4.99 bucket of popeyes chicken?

"How do they expect to feed my kids?"