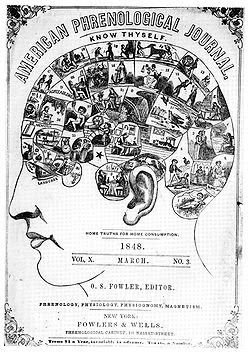 Phrenology is a discredited science of yesteryear.

It asserted that "....the personality traits of a person were determined by 'reading' bumps and fissures in the skull."

These quacks literallly mapped the brain and hailed it as science!

I first learned about this rather funny junk science from John Taylor Gatto. Apparently all the architects of government schooling were zealous phrenologists - in particular Horace Mann, the patron saint of state-sponsored *education*. Read this passage below from Gatto's book:

Magic in one form or another had always appealed to professional school authorities as the means to manage students. Horace Mann, as you know, dedicated his entire Sixth Report to a paean in praise of phrenology, the "science" of reading head bumps, and every major schoolman from Mann to G. Stanley Hall and John Dewey was a serious phrenologist—long after the craze had vanished from upper-class drawing rooms and salons. That should tell you something important about the inner itches of these men, I think. The quest for certainty in a confusing new land without rules was as much the religion of our founding schoolmen as searching one’s family for signs of reprobation had been for Puritans. But modern schoolmen needed a scientific cast over their religiosity, times having changed.

Early educational psychologists scientized the practice of manipulation behind a common expression of modern pedagogy—"motivation." Book after book advised pedagogues how to "motivate" charges with technical advice based on an underlying premise that young people did not want to learn and had to be tricked into it, a premise which on the face of common experience was absurd. As the significance of Bernays’ arguments penetrated the high command of government and industry, so too did manipulation become sine qua non in classroom teaching, the standard by which teacher quality was measured.

But the methods of Bernays or of educational psychologists like Dewey, Munsterberg, Judd, Hall, Cattell, Terman, Thorndike, Goddard, and Watson which so radically transformed the shape of twentieth-century schooling are about indoctrination strategies—building and using psychological tools to create compliant children. If nature hadn’t cooperated by actually making empty children, then schooling would have to do the job. And yet, for what grand purpose children had to be emptied, not many knew. For those without religious training or ignorant of the evolutionary sciences, it made only the bleakest sort of sense. 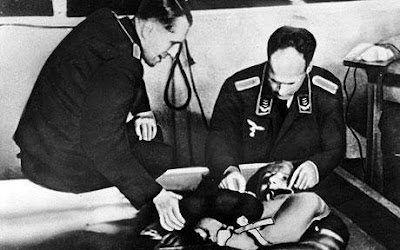 Obviously, that excerpt transcends the subject of phrenology. But I wanted to post it in full because it's darn insightful, and frightful. Read it again, and again until digested. Here's the link.

In this journal, Mann targeted the public school and its problems. The six main problems he targeted were: (1) the public should no longer remain ignorant and free, (2) that such education should be paid for, controlled, and sustained by an interested public; (3) that this education will be best provided in schools that embrace children of all diversities; (4) that this education must be non-sectarian; (5) that this education must be taught by the spirit, methods, and discipline of a free society; and (6) that education should be provided by well-trained, professional teachers. To sum it all up, Horace Mann worked effectively for more and better equipped school houses, longer school years (until 16 years old), higher pay for teachers, and a wider curriculum.

The practical result of Mann's work was a revolution in the approach used in the common school system of Massachusetts, which in turn influenced the direction of other states. In carrying out his work, Mann met with bitter opposition by some Boston schoolmasters who strongly disapproved of his innovative pedagogical ideas [4], and by various religious sectarians, who contended against the exclusion of all sectarian instruction from the schools. He is often considered "the father of American public education".

And now here's a quote from this dirtbag that you won't find on Wikipedia, or any Big Education hagiographies:

I look upon Phrenology as the guide to philosophy and the handmaid of Christianity. Whoever disseminates true Phrenology is a public benefactor.
- - -Horace MANN

I'll bet when I die, I won't have uttered anything 1/10th as Moronic as the above statement in my entire lifetime - including drunken stupors, addled youth, and drooling 'old coot-hood'.

To read my recent, and lighter, post on phrenology....click here.
Posted by CaptiousNut at 10:14 AM

Another guy into phrenology was the late Stephen Jay Gould, who wrote a book about it, "The Measure of Man" I think it was called. I don't know why, but we read this in my 7th grade English class for some reason. That and Rachel Carson's "Silent Spring" didn't seem to have many merits as far as good literature were concerned, yet my loopy leftist teacher seemed to think they were just fine (we also read the play A Civil Action later in the year).

I remember she once announced to the class that she refused to take the pledge of allegiance because her brother died in a "police action" in Vietnam. I assume that if Congress had declared war and her brother had been drafted and killed she'd happily do the pledge?

Leftists are so stupid.

Full disclosure: I don't do the pledge or stand for the national anthem because I don't owe an oath of fealty to any arbitrary, violent collective.

Libertarians are so stupid.

Crap, Stephen Jay Gould was born in 1941 and he was a *phrenologist*?

Wikipedia doesn't mention that, either. Instead it mentions *craniometry* which seems like new code for old quackery.

And, by the way, I think your firm stance against the Pledge of Allegiance is outstanding, and fiercely independent of you.

Now we just have to work on the coporate wage slavery thing!