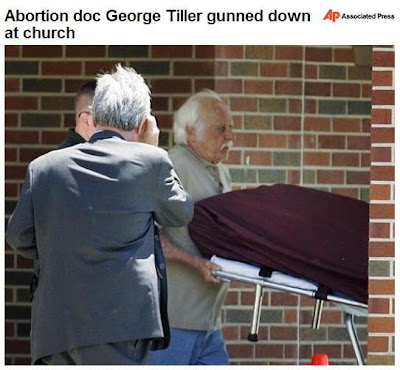 Or, should we invoke a Will Durant quote?

Justice is not only blind, it limps.

Read - Aborting Morons And Thugs.
Posted by CaptiousNut at 7:45 PM

Email ThisBlogThis!Share to TwitterShare to FacebookShare to Pinterest
Labels: abortion

Combating murder with murder is the business of war, not peace. Abortion is murder by other means, and when civil war strikes here in America, abortionists will be tried for crimes against humanity...and hanged.

You have to find and read that book - Aborting America. The author, and protagonist, Bernard Nathanson, is an intellectual force. Too bad he's advanced in years - or he might have been able to wreak some real *progress*.

R u guys serious? This MD was performing a legal medical procedure and one needed at that... do we want to go back to the days of alleyway dangerous abortions which endanger the life of women?

How many deaths were we talking about when abortion was illegal? In N.A.R.A.L. we generally emphasized the drama of the individual case, not the mass statistics, but when we spoke of the latter it was always "5,000 to 10,000 deaths a year." I confess that I knew the figures were totally false, and I suppose the others did too if they stopped to think about it. But in the "morality" of our revolution, it was a useful figure, widely accepted, so why go out of our way to correct it with honest statistics? The overriding concern was to get the laws eliminated, and anything that was within reason that had to be done was permissible. Statistics on abortion deaths were fairly reliable, since bodies are difficult to hide, but not all these deaths were reported as such if the attending doctor wanted to protect a family by listing another cause of death. In 1967, with moderate A.L.I.-type laws in three states, the federal government listed only 160 deaths from illegal abortion. In the last year before the Blackmun era began, 1972, the total was only 39 deaths. Christopher Tietze estimated 1,000 maternal deaths as the outside possibility in an average year before legalization; the actual total was probably closer to 500.That's Dr. Nathanson from the post I wrote and linked to. Please read the whole thing; and the book.

I also wrote this:

How many times have you heard the cry that banning abortions will result in back-alley, coat hanger-induced deaths? Dr. Nathanson calls this the most specious of arguments. Even if abortion was banned today, illegal abortionists would use the "safe" (for the mother) technology that doctors currently use. So dead pregnant women in back alleys is a propagandistic ruse of the highest order - yet multitudes swallow it whole.*Legality* is a fluid, subjective notion. Remember slavery?

Realize that the worst part of your *retort* was by no means its factual inaccuracy.

The worst part is that it consisted merely of regurgitated propaganda. I know you don't want to go through life a docile pawn, unwittingly fighting the wars of others. Heal thyself.

I always had a vague notion that abortion was horrific; BUT it wasn't until recently that I did hard research, via that book, and fully grasped the subject.

Dr. Nathanson pioneered the *abortion movement* in America. He's since done an about face. Read what he has to say and then get back to me.

Even if you maintain the legality and morality of abortion, what do you think about Planned Parenthood's $115 million in annual profits? (on 260,000 abortions!)

Remember they get over $300 million in yearly government subsidies.

Abortion is the furthest thing from a binary issue we have on this planet. In other words, one can be for its legality but against subsidies, and amenable to individual states banning it.

It's a subject that demands research and contemplation - not intuitive shibboleths.