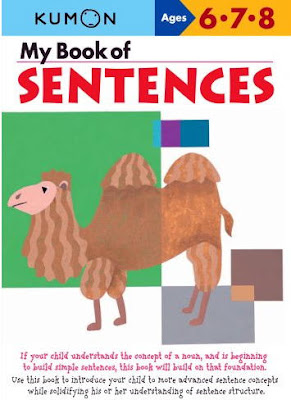 So PrinceC-Nut is just about 4.5 years old now and his outside-the-school education is rapidly getting more interesting.

We're on the final book, Sentences, of the Kumon *pre-school* series. It's pretty amazing that he's already learning about what nouns, adjectives, and verbs are.

I've been pushing his email a bit. We write a few lines on paper to a relative, then he has to log into his Gmail account and type the message in and send it off. This way he gets responses from his aunts and grandmothers (grandpa is not *online* - even though he's 62 years older than his grandson!) - which he can read himself. I figure since this is how modern day adults correspond, then why not get him started on a skill he'll utilize for the rest of his life, right?

Also, more generally speaking, I consider composition a core component of education. Ideally, I think students should everyday do some reading, some computation, they should be composing, and even doing some oral presentation. To that I'd add that the well-rounded student ought to regularly be *creating* and, of course, *working*. These endeavors remain goals within themselves - almost regardless of the particular context or subject.

Next up for my son on the math side will be division (How do we split up 12 cookies in our family?) and my favorite - geometry. Although I haven't figured out how to proceed formally as of yet. Apparently Kumon is going to release in July a new series on geometry but I don't want to sit around and wait. By then we'll probably be studying continuous functions.

But as I said at the outset of this post, the learning curve is getting pretty steep and our educational options are broadening. My son can sit and read by himself now. And this opens up many, many avenues. Heck, he grabbed the macaroni and cheese box the other day and hollered out the instructions.....telling me I needed *6 cups of water*, etc. 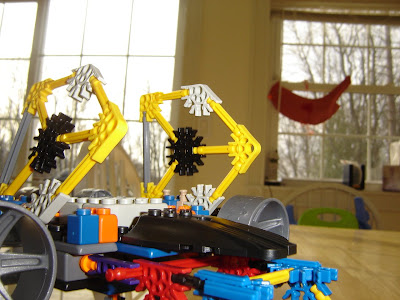 One thing that he's really into, on the toy side, is what he calls *Polish Legos*. They aren't actually Polish; they are called Knex. I jokingly called them Polish Legos when he got his first box only because the young lady, a friend of ours, who gave them to the Prince is 105% Polish.

Anyways, these are far beyond conventional Legos. They are tiny and there are numerous types of interlocking pieces. My son can now follow the instructions and build these very complicated spaceships, motorcycles, and whatnot. It excites me that he's now mature enough to hunker down, concentrate, figure out, and deal with the frustration that comes with intricate projects (and when one's sister comes by and spitefully destroys his works in progress!).

I've also given my son free rein with my digital camera - only partially because I bought a new one. In fact the above pic is his work. Of course he absolutely loves it, which 4 year old wouldn't? But he's learned, mostly by himself, how to center targeted images in the viewfinder, that he must keep steady, how to shoot video footage, and we're even working on how to upload to the computer. Meanwhile his agemates are watching Elmo....

When I pull out of the driveway, I ask my kids which roads to take. In other words, I say, "we're going to the library...how am I going to get there?" We recite street names as we drive by them. And I usually quiz them on which of their friends live where. Ideally, I would like my son to hold the GPS device in his hands so he could get a firmer grasp of maps and geography....but then his little sister would be demanding equal time.

I also make he and PrincessC-Nut try to remember where we park the car; and I ask them to find it before we start walking back to it. I'm just forever thinking about adding new responsibilities to my brood. And why wouldn't I?

The sooner they grow up and become productive individuals, the lighter my load, and the sooner I can relax.
Posted by CaptiousNut at 3:48 PM

1.) Do you let Prince follow the Knex instructions or do you encourage him to build what he wants/look at the picture on the box and try to figure it out?
2.) Have you yet confronted this, and if yes how do you handle it/if no how would you handle it: are your children differently enabled intellectually, and do you think their genders have anything to do with it? And if one is a genius and one is dull, how will you respond to that?