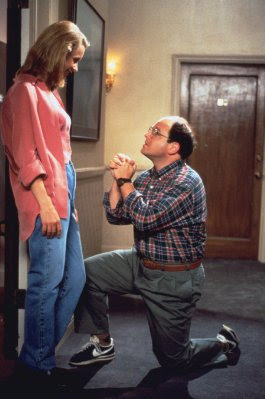 I generally don't like to do this, but here I'm just going to link to an interesting column penned by a woman whose fiancée is trying to get her to sign a pre-nup - Will You Marry Me.

I think most of us marry within our *socio-economic tribe* so even if one half of a marriage brings a bit more financially to the table, the amount usually isn't too problematic.

But there are plenty of instances of trust-funded wealthy people marrying below their station. And in those cases the pre-nup idea most often comes from the *parents*. Think about it, if one is Moronic enough to marry down....then in all likelihood they are too clueless to think about *asset protection*.

Okay, that last line was a jest.

Now read this article - The Chilling Effect Of State's Divorce Laws - for some horror stories on alimony.

Though I haven't researched it much, I'll be that if I did, I'd come down against state-sanctioned marriage for both verts and inverts.

For the record, I'd never sign a pre-nup - not even if I was marrying Bill Gates' daughter.

Yeah, my ego is that big and my brain that small.
Posted by CaptiousNut at 5:56 PM

Pre-existing business partnership agreements compelled me to insist that toots (then a hard working but poor sales rep) sign a pre-nup, which she cheerfully did.

Since then, she has been a voracious serial business opportunist, a great wife and more fun than a carnival ride.

That much I will presume.

Where'd that nickname come from? From a prior comment, I thought *toots* might have been one of your daughters?

Hahaha, farting girls - yes they do. But no, Toots, rhymes with puts = first and only.