Right now, there over 70 homes in the tony town of Hingham, Massachusetts listed for sale at $1 million or higher.

But in the last six months, only 8 homes have sold over that price point.

I talked to a local broker and she confirmed that *the high end is dead*.

But she told me that the low end, the 400k stuff is going bananas. She said, "These homes are selling in like one day."

My general rule of thumb is that if something is selling *like in one day*, it's the last thing in the world I want to be buying. Supposedly foreclosures under 100k are getting scooped up that fast as well in places like Cape Coral, FL.

Again, I say wait. For a long term investment/gamble you want to buy junk that's bidless, not bidfull.

There's plenty of supply on the way. Just wait.

Recently there's been this ridiculous run to bid up stocks, *cheap foreclosures*, and chicken-shack homes in places like Hingham. I guess the bear market stock rally, the warm weather, lower interest rates (for the creditworthy), and hopeful delusion are ruling the day.

People are getting complacent again - especially the big banks. Look at this chart that Calculated Risk put up today: 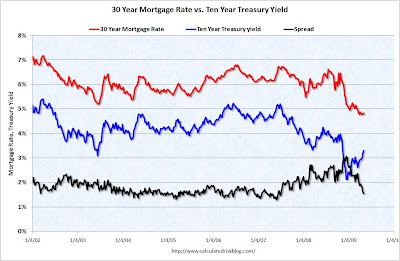 Now it's great that banks can essentially borrow at 0% in the short-term and lend at 5% to mortgagers. I mean it's great that they can generate some sorely-needed profits that way. But do they really have to squander the windfall of cheap money by selling 4.5% mortgages as they've been doing this past month?

In other words, look at the chart, they've reduced the *spread* on their mortgage lending back to normal levels. I submit they should not be dropping mortgage rates; what they're doing is arrogant; and it's what got them in trouble in the first place. 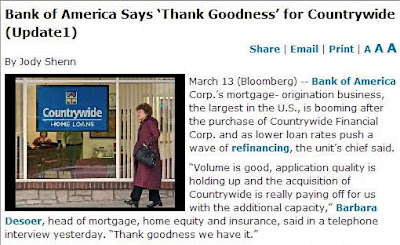 Drudge also had, which I can't find now, a pic of Ben Bernanke giggling on his site the other day.

So everyone is giddy about *refi's* - the banks, some real estate lawyers I know, probably appraisers,....

They need to bear in mind, that once the US Treasury market starts to fall apart - and that could be very soon as I'm now out of my short - there might not be any more refi's for a decade.
Posted by CaptiousNut at 11:55 AM

A house is not a stock or liquid commodity to be bought low and sold high. I'm not saying to ignore the price - that would be moronic. But trying to pick a "bottom" in the housing market is rather meaningless if you're using that to decide when to purchase a home.

Yah, homeownership is an expense, so your basis is critical. Duh. But if you see a home you like, that your family can live in and have a nice life in, that suits your lifestyle, and that is something you can well afford in downside scenarios, then that's when you buy.

Hingham is a town that is always going to be desirable, and the homes are for the most part very unique and different from eachother, so it is tough to pick a $/sf number and base your decision on that.

I bid on two different homes about 2 years ago in Hingham with the full knowledge that the bottom wasn't close. So there's far more to my thinking than *picking a bottom*.

When you go to Fenway, you know you are going to get ripped off buying a beer, right? Yet still, you can justify it from many different angles.

I need 2,700 square feet OR the ability to rent and walk to an office. Check that, I would like 2,700+ sq feet. Homes, not in facsimile developments are all about the *tradeoffs*: location, yard, sq footage, aesthetics vs. practicality,...

The homes I bid on in 2007 had no backyards. At the time, I didn't think I wanted/needed one. Now I'm not so sure I could make that *tradeoff*. But who knows, a couple years from now, after mowing the lawn 1,000 times, I may swing back to my original stance. The hard part is predicting what's going to be vital going forward for you and your family.