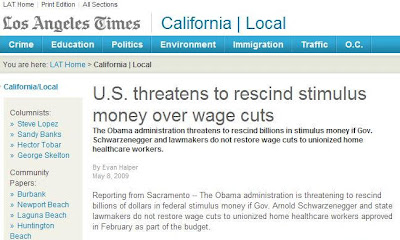 Schwarzenegger's office was advised this week by federal health officials that the wage reduction, which will save California $74 million, violates provisions of the American Recovery and Reinvestment Act. Failure to revoke the scheduled wage cut before it takes effect July 1 could cost California $6.8 billion in stimulus money, according to state officials.

I actually had to read that article to be convinced of the headline. The State of California, in an effort to stave off fiscal bankruptcy has cut the pay of its *unionized home healthcare workers*, among many other trimmed expenses.

But that's not going to fly with the Obama administration. They are going to withhold Federal monies from California if Arnold doesn't spare that sacred cow. Thou shall not reduce thy budget. Stay bloated and in debt to the Federal government!

It's ridiculous how the states let the Feds confiscate income tax and then, if they're lucky, if they *play ball*, Washington will magnanimously give the dough back. Remember those *kids* arguing not long ago how the so-called blue states paid more in Federal taxes (than they got back)?

Well how smart is that?

Meanwhile, this is the situation in the land of fruits and nuts: 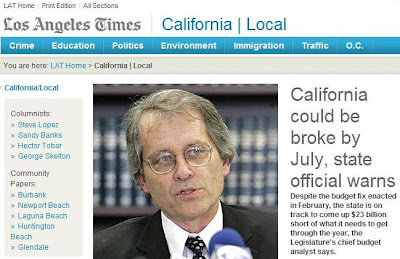 Reporting from Sacramento -- California could run out of money as soon as July, the Legislature's chief budget analyst warned Thursday, as a new poll showed voters poised to reject five budget-related measures on the May 19 ballot.

If the propositions do not pass, the state could find itself as much as $23 billion short of the money it needs to pay its bills over the next year, according to a new forecast by Legislative Analyst Mac Taylor.

Whole states are bankrupt. Pensions are leagues under water. Unemployment is soaring. A new foreclosure wave is about to come crashing from shore to shore, the Feds are drunk printing and borrowing around the clock....

And yet the Dow Jones has rallied from 6,600 to about 8,600 in the past two months - a bounce of 30%. Even the prudent bears are getting wiped out. Now they'll be absolutely nobody with cash to buy homes, stocks, and bonds when they start their inevitable crash.
Posted by CaptiousNut at 4:28 PM

These are precisely the type of government interventions that made the Great Depression "Great". I think these are just baby steps as well.

Since you are the math whiz, what is your finding on FAZ? Is it performing as advertised in the prospectus?

I have to admit, I've never read the prospectus - or any prospectus for that matter.

FAZ is certainly turning into a complete disaster.

Thinking on it, the smartest way to play FAS/FAZ would be to write OCT 7.5 calls on FAS. At the current rate of decay, it seems inconceivable that FAS would be over 7.5 by October. Barring a dollar collapse, of course.