Bailed Out By MTV? 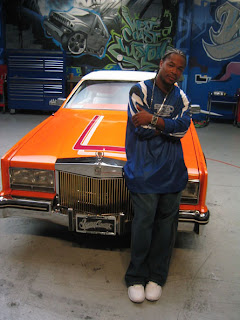 In a prior post I discussed how my landlord's car *blew up*. See - Update - My Moronic Landlord.

Subsequently, I mentioned how he totaled that car, actually getting ejected from the convertible, and almost killed himself. See - More Landlord Recklessness.

Shortly thereafter I was on my deck with family in town when a tow truck showed up with his utterly annihilated car. This schmuck was going to dump the eyesore wreckage on our property! And he did! What could I do?

When I say this car was destroyed, I mean it was DONE, unsalvageable. I'm sure he got the insurance money, right? So why was he keeping this cursed vehicle? This death-trap? And why couldn't the a-hole dump it next to HIS house???

After a few months of having to stare at it, the *explanation* found its way to me.

Turns out, my Moronic landlord thinks he can get MTV's Pimp My Ride to come out and rehab his car for free, as that's what they do on that TV show.

Only a positively empty skull has room enough for such a grand delusion.

But, in fairness, for two years I've seen this clown get all geeked up for each and every *bailout* that was going to keep him afloat. Back in 2007, around this time of year, I remember him having a veritable fiesta at his office with another *subprime* colleague because the Federal Reserve had decided to lower interest rates. That didn't save him or his *business*, nor have all the tax breaks, loan modifications, political rhetoric, or hundreds of billions in newly minted fiat. He's simply been conditioned from without to think that some white mulatto knight is going to someday come to his financial rescue.

I have great BEFORE and AFTER pics of this vehicle....only I won't publish them until after my relationship with this knucklehead is over. When you see the latter y'all will be wondering how on this over-heated Earth did he not die in that crash.

Did any of you ever hear that rumor that if your college roommate committed suicide....that you would automatically get *all A's* for the entire school year?

Well, in the imaginary scenario where my landlord didn't walk away from that wreck....I've contemplated how long I could stay here *rent-free* before getting booted out.
Posted by CaptiousNut at 10:23 PM