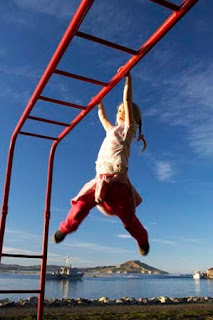 On Sunday, PrincessC-Nut fell from the monkey bars. It was obviously on my wife's watch as I never have incidents like this!

Her wrist swelled up and didn't improve over the past two days.

So I spent all day today driving her around to doctors with the end result being a pink cast atop two buckle fractures in her wrist. She'll be wearing it for 3.5 weeks. It's her darn right arm to boot. Though thank God swimming season is over!

Do y'all think I was wrong to force her to do her Kumon books with the left hand this evening?

I remember that my naturally left-handed grandmother experienced something similar back in the day. Though, that was pure coercion by her teachers who tried to get everyone to write with the right. (Just think how many of today's educational practices will be deemed barbaric by future generations!)

Anyway, today was a complete loss from my standpoint. I'm exhausted and got nothing done outside of turning heads in the waiting rooms.

While other kids sat there watching television, staring at the walls, and playing video games....I had my 4.75 year old son doing his 4th Grade math in front of them all. People kept looking at us like we were aliens!

So much for wood chips!
Posted by CaptiousNut at 8:18 PM

Funny stuff from a mass politician...

The state of NH should send him a thank you card...