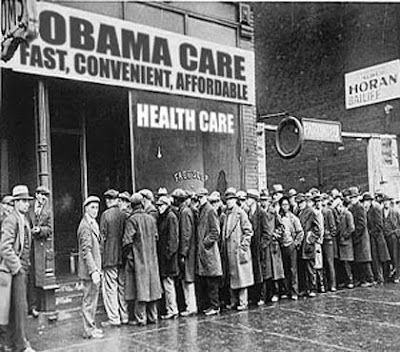 I just heard on the radio an ad urging people to fight Obama's healthcare proposals because it would *publicly fund abortion*.

The government already pays for it and has been for years!

Over a third of Planned Parenthood' operating budget already comes from federal and state GOVERNMENT grants. In 2006 that sum was a staggering $335 million dollars. Planned Parenthood, like all gov't programs, was in fact OVERSUBSIDIZED. How else to explain their $115 million in reported profits (2006?). See link here.

So the abortion argument against Obamacare is as intellectually weak as...

...As all those 'old coots' complaining that Obamacare would "ration healthcare".

Because they're already recipients of a rationed, single-payer entitlement called Medicare! 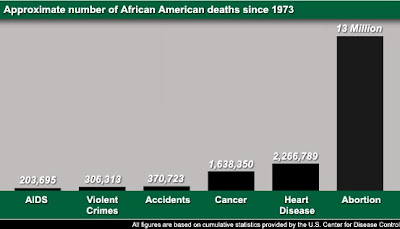 Now there's a chart that no doubt makes Margaret Sanger smile in her grave.

since u r in money business and all, i thought i would ask your opinion about the below comment :

"
These are peanuts compared to IB/Wallstreet firm compensations. Entry/junior associates getting anywhere from 200K to Half-mil total compensation per year. Dont even think about mid-to-senior employees.

Take that you PHD holding scientists at tech/industrial companies that are doing something "productive".

Its all a pyramid structure, at the top is companies/people managing money (other peoples') - GoldmanSucks etc.

At the bottom, is joe-six-pack. Lawyers get to choose where they want to be in the pyramid. Everybody else gets put into it, based on thier domain/education/field-of-work.

The higher u are on the pyramid, the more u *ape folks below u. No wonder the best & brightest from IvyLeagues choose wallstreet. Quote from Warren Buffet: "If i were to start all over again fresh, i would still choose money management
"

This was in reply to GM rescinding paycuts and paying paychecks from .gov bailout.

In my experience, there are very few Ivy Leaguers on Wall Street, relatively speaking. The fratboy meatheads on Wall Street really do consider Boston College to be Harvard - at least academically!

Nobody entry-level or junior gets 200k to start in any business in America (save for pro sports, etc.). So that is beyond hyperbole.

There IS a pyramid. Diabolical Goldman Sachs sits atop in the sense that they steal the most money (from gov'ts, their own clients, etc.).

I do believe that lawyers are toll-charging leeches.

I don't know if I would say Joe6Pack is at the bottom. He gets a lot of goodies redistributed to him. I feel more comfortable generalizing about the top than the bottom.