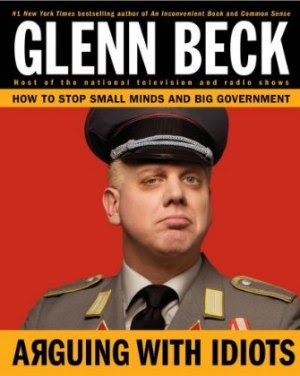 Now I've, only recently, seen this guy's name on Drudge as having some highly rated news show.

And I've had a few people ask me if I ever watch or listen to him.

But my answer has been a categorical "NO". I've never heard a word this man has ever uttered nor would I recognize him if he walked by me on the street.

That is until this past weekend when I saw his book on sale at the airports.

And Small Minds and Big Government?

Without knowing anything at all about his views, it seems to me that Glenn Beck more likely knows WHO I AM and may have gone about ripping off MY SHTICK!

But apparently, like most of my readers, he hasn't learned enough.

One mustn't *argue* with idiots or Morons.

Mock them, Marginalize them, try to profit from their stupidity, or perhaps pray on their behalf....these are the only appropriate courses of action.

I would no sooner *argue with an idiot* than I would curse a rock for obeying the laws of gravity.
Posted by CaptiousNut at 10:56 PM

Email ThisBlogThis!Share to TwitterShare to FacebookShare to Pinterest
Labels: blogging

Glenn Beck is just a Fox News Ass! I also wouldn't call what he does news either.

If you read or listened to anything this guy had to say, you probably wouldn't associate your name with his, even humorously accusing him of ripping off your schtick. The definition of moron features his photo.