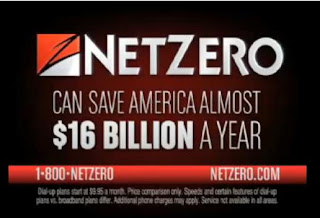 The other day, I espied a new *mom* at the park; I approached her; made time with her; and left with her email address.

Okay, that's not quite the whole story.

My wife had told me that if I ever ran into a woman with 3 kids, who had a boy our son's age named X,...she told me to get her phone number because our children played really well together. And this way they could try to meet up in the future.

But the actual email address put second thoughts in my wife's head.

Furthermore, she disclosed to me that it was a joint husband-and-wife account. And I won't even talk about the childish reference to a favorite sports team that constituted the account name.

In summary, anyone with such an antiquated, Luddite, cheapskate email address ought to be horribly embarrassed - which she was upon revealing it to me.

I pretty much feel the same way about hotmail email users. That is sooooo 1990s!

'Old coots' and 'old bags'....we can forgive them for sticking with AOL.

People that use their local internet provider, e.g. Comcast, Charter, Time Warner, Cablevision,...., they are a bit suspect as well. They don't understand that if they move out of the region, that they'll lose those email accounts.

I do have a near fifty-year old SIL that still has Earthlink....

But probably the only thing worse than *Netzero* would be, I don't know,

....having a Compuserve email address???

Don't ask me why I found the following funny.

Maybe the funniest part of it (besides the credit card company being *next door*) was that this idiot took the time and effort to make the video!
Posted by CaptiousNut at 11:27 AM

I give my yahoo/hotmail e-mail address to people I really don't want to deal with? Perhaps she was doing the same???