Haven't Laughed This Hard In A While 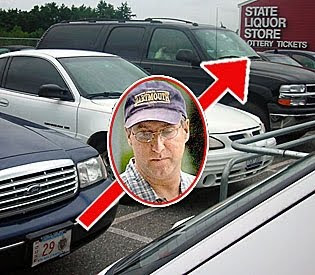 A Westport lawmaker who voted to hike the state sales and alcohol taxes was spotted brazenly piling booze in his car - adorned with his State House license plate - in the parking lot of a tax-free New Hampshire liquor store, the Herald has learned.

Michael J. Rodrigues’ blue Ford Crown Victoria, emblazoned with his “House 29” Massachusetts license plate, was parked outside a Granite State liquor store on Interstate-95 South over the weekend, according to a witness who provided pictures to the Herald.

The witness, who requested anonymity, claimed he approached Rodrigues, noted his State House plate, and asked if he was on personal or official business. Rodrigues, who was loading booze into his car, snapped “mind your own business,” the witness said.

No, the Moron took the occasion of his documented blunder to cast ridiculous aspersions:

He also blamed the brouhaha on "Republican demagoguery."

"Unfortunately, I think that’s why the Republican Party is in such bad shape in Massachusetts," Rodrigues is quoted as saying. "The electorate here is smart enough to figure out what they’re up to."

As an apostle of truth, I just HAVE TO correct his last line.

It should instead read,

"The electorate here is DUMB enough to NOT figure out that powerless few Republicans in this state have nothing to do with me driving my official car out-of-state on vacation, with me getting caught skirting regressive taxes which I helped raise, nor do they have anything to do with helping cause the fiscal waste that gave rise to the tax increase in the first place!"

Many thanks to Kfell - who was supposed to be fasting from Big Media - for alerting me to this one.

This is the best laugh I've enjoyed since Eliot Spitzer.
Posted by CaptiousNut at 8:18 PM

The Union Leader finally put the article up on the front page. Apparently they asked a complete communist NH politician Martha Fuller Clark. Here is her quote...

Sen. Martha Fuller Clark, D-Portsmouth, said she does not think what Rodrigues did was wrong. States often have to make difficult decisions to raise revenue, she said.

"It seems to me that we as individuals --are allowed to make our own choices about what we purchase and where we purchase it," Clark said.

I am sure if this guy was a Republican and voted for the tax hike, she would say the thing...Yeah Right!

I'm wondering if the Boston Globe covered it at all...