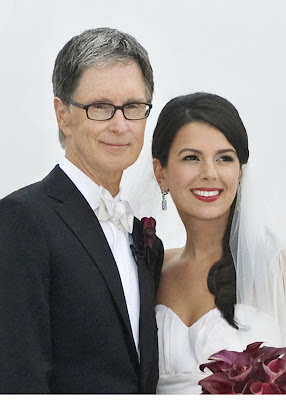 The jillionaire owner of the Boston Red Sox just remarried. He went for a broad half his age.

The newspaper - which owns a stake in his team - described her as somewhat of an INNOCENT FLOWER:

Henry, who will turn 60 in September, met the 30-year-old Pizzuti last summer at Alibi, the bar at the Liberty Hotel. Though recently divorced from his first wife, the Sox owner was instantly smitten and pursued the raven-haired Pizzuti. In a recent Boston magazine story, Pizzuti said she initially rebuffed her millionaire suitor, but finally relented.

Yeah, she finally *relented* to the advances of this ugly 'old coot'.

Read: She finally did the math on fall-back alimony.

One simply cannot trust anything written in the Globe.

This delicate flower was by no means as advertised - as I've been informed by a college classmate of hers.

He knew her intimately a dozen years ago. The most convincing part of his characterization was the fact that Ms. Pizzuti had at that tender age (18-19?), well....., let's just say she had an unpaired part of her anatomy pierced!

So it was decreed by me and the ten other MEN hearing this testimony at the bar last night - that this girl was total slut her whole life. I'll bet that she probably only hesitated hooking up with Mr. Henry on account that such a high profile liaison would publicly out her...for what she was all along.

Make sure all of y'all who read the Boston Globe come here just as often....

....to read the corrections!
Posted by CaptiousNut at 8:34 PM

If I had that kind of money, I wouldn't waste 10 seconds on an amateur.

However, I am somewhat puzzled as to why he would marry such an old woman. Must be love.

Yeah, I remember when I thought that 3 decades on this over-heated planet made one ANCIENT!

Now if only I could remember where I left my glasses....

now thats what i call "made for each other".

perfect. each of them wants something in the other. :D

Anonymous, who are u calling an amateur ? He is the one thats amateur in this relationship :) - in terms of both sexpertise and scamming.

With that out of the way... wow... this blog has really took a sharp hard turn away from family-centric content lately. You must be trying to agitate the homeschoolers who are showing up in droves!

my English is getting worse every day. I fear I'm terminal.

Someone needs to shoot that rat offa his head. I can't tell if thats hair or a coon skin hat.

yah, that's why we come here - for the corrections!

more likely for the confidence boost - not unlike the innate need to watch sensational news or tragic movies. just when you think your life is at a low point, you can come here and see just how far down the bottom is.