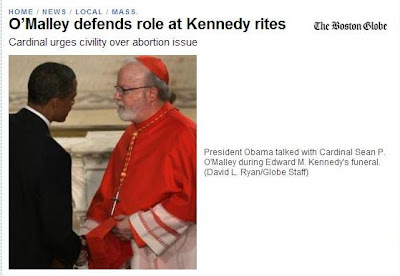 First off, I don't know whether this is true or not, but I heard that Ted Kennedy had the stones to ask the Pope for a funeral benediction.

Generally speaking, people usually ask for a priest, ANY PRIEST, when they are dying so that they may make a final confession of sins.

But freakin' Kennedy wanted, not to admit guilt, but rather to have the highest Catholic priest publicly whitewash his portfolio of atrocity!

Though long since brain dead, the old dog was playing politics to the very end. He had 77 full years to worry about his *legacy*, didn't he?

I hardly doubt Mother Theresa or any other virtuous types were worried about such outgoing clerical approval. Both Ted's insecurity AND his true colors manifested in this final desperate act. This piece of garbage thought all it would take was a phone call from the right man. Was there ever a doubt that to Ted, morality was always and merely a relative political construct?

Apparently the Pope did have a lengthy correspondence with an ailing Ted Kennedy and judging by the sparse press release of it,...I think it's safe to say that, thankfully, the Pope refused to oblige Ted's egomaniacial request.

But that didn't mean there wouldn't be more than a few other members of the Catholic hierarchy itching to turn Ted Kennedy's death into their own political statement - particularly in the Roman Catholic wasteland that is Massachusetts!

O’Malley, writing in his blog, also revealed the substance of a conversation he had with President Obama near the altar of the Mission Church as the congregation assembled for Saturday’s funeral. He said he told Obama that the Catholic bishops are "anxious to support a plan for universal health care, but we will not support a plan that will include a provision for abortion or could open the way to abortions in the future."

Does this mean that the Catholic Church is FOR socialized, Big Government healthcare?

They are FOR *robbing Peter to pay Paul's medical bills*?

Thou shall not steal, anyone?

Now look, first of all I was born, raised, and still consider myself a practicing Catholic.

But I've learned a bit about large institutions recently.

This Cardinal O'Malley is not a person, he's a type. Just who do y'all think ascends within the ranks of Big Business, Big Government, and Big Church?

It's the *company men*, those who do what their told, those amiable fellas who *manage up*. I would no sooner expect genuine competence in the Catholic hierarchy than I would expect it in the management of Bank of America!

I don't care - this Cardinal O'Malley, and any other person on this planet who advocates Bigger Government in light of its record of havoc, is a complete Moron.

For a minute there ponder those guidelines and one Ted Kennedy....

Even though the blue-blooded Kennedy didn't himself need to covet....far more damning was his relentless encouraging of millions upon millions of others to do so.

Could you imagine how stressed out you'd be if you had done what Teddy did and were on the cusp of meeting your maker?

I'm right sure that Ted's personal suffering started well in advance of his final breath.
Posted by CaptiousNut at 7:46 PM