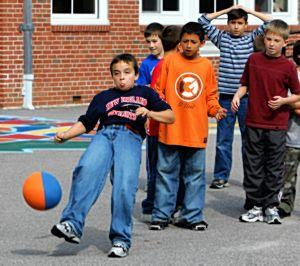 Today there's a hilarious article, by a total buffoon, in the Boston Globe:

WHEN SCHOOLS hire coaches to teach children how to play, it shows just how much we’ve destroyed childhood.

The Conservatory Lab Charter School in Brighton is paying $23,500 to the national nonprofit Playworks to engage children in old-school activities like jump rope, hula hoops, four square, capture the flag, circle dodgeball, and kickball, according to a Globe story this week. Playworks says its mission is to help children, particularly in low-income urban districts, learn the principles of "fair play and positive conflict resolution" through "basic" playground games.

"It is an extraordinarily sad commentary on our society that we have to give kids adults to teach them how to play," said Boston College psychologist Peter Gray, who this year published an article in the American Journal of Play exploring how play and humor were critical to the development of hunter-gatherer societies.

Remember, these are the same schools that have banned tag and other *exclusionary* games like dodgeball. 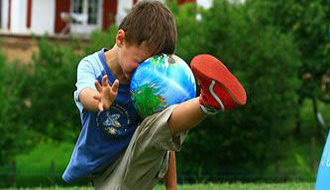 So why can't kid's *play* by themselves these days?

Certainly, the answer is multivariate, right?

But the nitwit author of that article puts forth his main culprit:

Nationwide, regular physical education has been wiped out by the drive toward standardized tests. Yet, many studies show a positive relationship between physical activity and academic performance.

I see a lot of bashing these days of *standardized tests* - which should really read *No Child Left Behind*. That was the work of George Bush, right?

Well it also passed Congress in a breeze. The House of Representatives passed it by a blowout 381 to 41 margin. In fact, it had more Democrat than Republican support.

Furthermore, it was AUTHORED by Ted Kennedy - though you'll never see his name associated with that now roundly unpopular bill...historical revisionism at its finest! 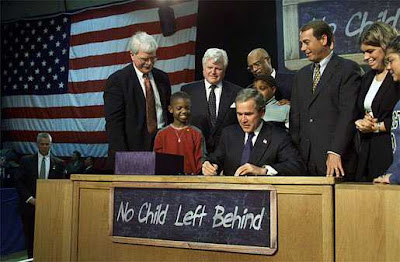 Man, am I aging rapidly. That post I wrote on banning tag is almost three years old yet it seems like just yesterday!

Now, where are my glasses?

See - Trick Or Treat, Morons.
Posted by CaptiousNut at 7:55 PM