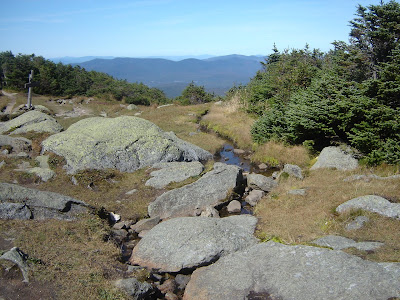 On Saturday, my buddy and I drove up to the White Mountains of New Hampshire.

We did a short hike in the afternoon ("Imp Trail"), got ourselves situated in the motel, and downed a few beers later that night.

Sunday morning, I arose at my usual time (4:46am or so). Later on, after scraping the ice off my windshield and whatnot, we headed for the base of Mount Madison. I think it was 29 degrees at 8am when we got going. And I thought Massachusetts had an early winter!

But, fortunately for us, it was an unusually clear day at that altitude. I don't know how many visits I've made up there since I was a kid, but I don't think I've ever actually seen the peak of Mount Washington - which was staring us in the face: 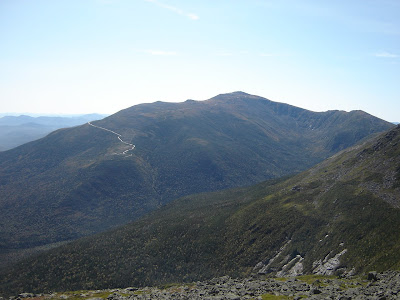 That's the *auto road* winding up it. It doesn't look so treacherous from this angle but I've heard countless stories from people who drove it and were scared half-to-death. I think some motorcyclist died there recently.

Now I'm not a *hiker* by any stretch. I've been up Mount Monadnock as a kid and a couple other 3,000 foot peaks. So at 5,367 feet Mount Madison is now the highest peak I've walked up.

As a novice in this department I had no idea:
Overall I was very satisfied with this trip - only I wish I had time to stay overnight and soak my bones in the hot tub. Instead, immediately after we hit bottom we jumped in the car and had to endure 5 hours of Sunday night traffic on the way back to Boston.

Physically, this trip was at the upper bound of my capabilities. I can barely carry anything on my achy back for any short period of time. But to hike Mt. Madison, I had to carry a pack full of clothes, food, and bottled water for 7 grueling hours. Heck I ate my food by order of weight! Not to mention my knees are pretty frail - one ACL having been blown out and replaced with a graft from a 6'7 black cadaver, and the other knee seemingly 80% gone now as well. In fact I was pretty nervous about the latter popping completely on this hike. My wife has a friend that broke her leg on one of these hikes and had to be carried all the way down the mountain. Despite the nice weather, on this particular day there weren't many hikers at all. Suffer an injury....and you'll be doing a little Bear Grylls through the freezing night!

But thankfully I completed the trip intact. Though I am sore as all hell at the moment - surprisingly my legs more so than my back. Remember I have to rest up for my GutterBuddy Florida golf trip this weekend....
Posted by CaptiousNut at 8:25 PM

Sooo, can you dunk now?

Nice peak-5367 or whatever feet. I always find going down (the mountain, the mountain) harder on the body. Not like when I was a kid and literally jumped and ran down mountains that size. Or in when climbing in the winter and sledding down the mountain trails.

I can in fact finally dunk.

BUT, post-surgery I've developed an insatiable thirst for orange soda....

I tried sledding when I was 17 and felt battered. That's a recreation for little kids who are still all cartilage - I guess.

carrying a backpack with ten pounds in it is a common recommendation for chronic low back pain. So, not surprising that part didn't hurt afterwards. Nice trip, do it while you still can.

My back may well be in pain at the moment.

But I just can't feel it for my achy legs!

Two days later now and my calves are still burning like I've never felt before.

If, fingers crossed, I did that hike/drive with no ramifications for my back....that would be utterly amazing.

And a testament to the yoga I've been doing religiously.

I'm STILL waiting for someone to thank me for getting them into downward dogs, sun salutations, and whatnot.