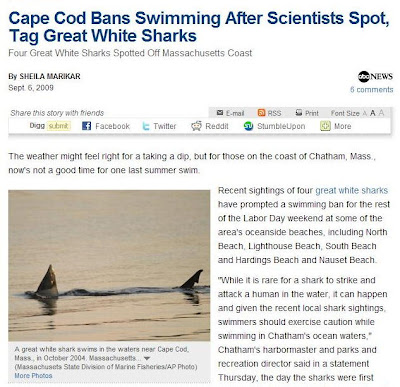 This Big Media/Big Government scare came replete with a pic from 5 YEARS AGO.

Heck, why not just put up a pic from a Jaws film?

Supposedly there were a few great white sharks *spotted* recently. You scaredy-cats can click here for the non-story.

Last week I stopped off at a park in Norwell, MA. There, while I pushed my daughter on the swing, I had to endure 10 full minutes of swine flu hystero-nonsense.

There were 5 women surrounding me there who were prattling on about everyone going back to school amidst the swine flu *outbreak*.

They were breathlessly talking about risk factors (asthma, pregnancy?); about vaccination - which towns had it; the reputed differences between the normal flu shot and the swine flu shot; how many of them caught the flu last year; etc.

One woman in particular, the 300 pound chief hysteric, was relaying the *horror* story of her friend - who was both asthmatic AND pregnant....and petrified to go back to her job as a government school teacher this week.

Throughout this palaver, I wasn't even really biting my tongue. No, I was pitying these poor women whose every idea, aspiration, ignorance, and worry had come from *without*. You see, these non-thinkers were veritable mind slaves - and wholly unaware.

Finally I interjected - in my resounding, trademark fashion. Out of the side of my mouth I asked them all if they know ANYONE who's been afflicted by swine flu.

Unanimously, they answered in the negative. AND, on that spur from *without* these same worrywarts went on prattling for a couple minutes about how the swine flu wasn't really that dangerous; how those few that died from it really died from other factors; etc.

Could they possibly have demonstrated their docility any more convincingly? 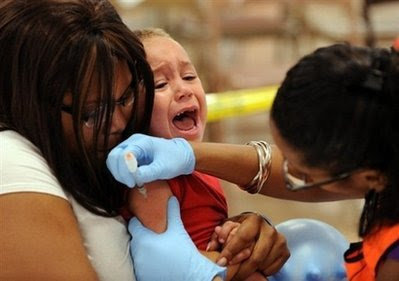 Then, basking in that little success, I tactfully warned the 300 pound hysteric about a more imminent health risk....

And I advised her to get vaccinated against cheeseburgers!
Posted by CaptiousNut at 10:13 PM