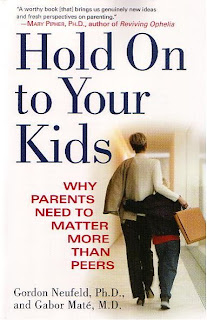 I was only about 28% of the way through this book

when my wife swiped it from me this morning on her way to NY.

But so far it's been good - and it's confirmed my previously articulated position that age-segregation may in fact be the worst aspect of Big Education. [Again, no small feat!]

The author asserts that parenting is not a *skill*. It's a RELATIONSHIP.

The way to get through to children is not simply to tinker with one's words and methods - time outs, rewards, punishments, etc. Because, once the brats have decided that their peers are more important, parents no longer matter at all. In fact, they are to be rebelled against by necessity.

Children, immature animals that they are, NATURALLY need to attach to people that can somehow comfort and protect them. Since they are at pre-school and K-12 school the majority of their time, they instinctively look to their age-peers for emotional acceptance. Psychologically, they CANNOT have intimacy, or attachment, with both their parents and their schoolyard jabronis as each represent opposite, even competing, poles.

Who did y'all think more about when you were youths?

What was more prominent in your thoughts and worries? Mom and Dad or certain kids at school?

What hurt more? Problems with age-mates and social difficulties in school? Or what your parents did and said?

Be honest with yourselves. Do you want your brood to spend as much time, energy, and emotion as you did fretting over transitory BS with other kids - kids who'll soon fade into irrelevance?

The author makes the salient point that teenage rebellion is not *natural* as most think of it. In fact it's a sign that parents have lost their kids. Teens, with their round-the-clock text messaging, hazing of misfits, peer pressure, and complete conformity are anything but INDEPENDENT. They've simply traded parental attachment for a *peer-oriented* DEPENDENCY. It's as I said in a prior comment thread:

However, it used to be that 15 year olds wanted off the farm. They wanted their own plot - and a wife.

They were itching for grown-up responsibility.

Send your kids to school (to create space?) and they will join the *youth culture*. You'll lose them forever AND they won't be hankering for any part of the adult world - save for your car keys, your credit card, and your home equity to pay for their year long camp, aka "college".

See? I intuited this stuff long before reading the fruit of some Phd's 30 years of research!

Now I haven't gotten to the part where the author explains how to foster a healthy RELATIONSHIP with your kids. And, 85 pages in he curiously still hasn't even mentioned *homeschooling*.

But I'll be better able to summarize this book when I get it back from the Mrs. and actually read the whole thing.

UPDATE - Complete Book Review - Hold On To Your Kids.
Posted by CaptiousNut at 9:37 PM