Life On The Ledge 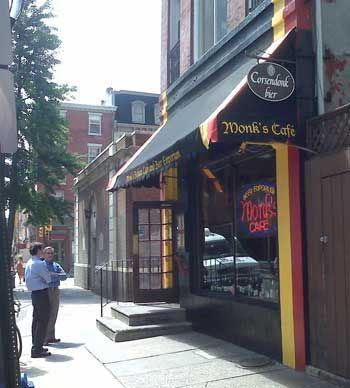 One Dead, One Critical After Fall from Center City Balcony

One man is dead and a woman was battling for her life after police say they accidentally fell from the balcony of a center city Philadelphia apartment.

Philadelphia detectives say a structural defect in the apartment balcony is to blame for the accidental fall, just before 3:00am on Sunday.

According to investigators, a 25-year-old man and an unidentified woman apparently stepped outside their fourth-floor apartment, above Monks Bar in the 200 block of South 16th Street, when a steel railing suddenly gave way as they leaned against it.

Both victims fell four floors to the alleyway below. The man was pronounced dead at the scene. The woman, who was not immediately identified, was listed in very critical condition at Hahnemann University Hospital.

Engineers from the city's Department of Licenses and Inspections were expected to investigate what caused the railing defect.

City inspectors closed Monks for "code violations" in the building where the bar is located.

Ah....Monks, one of my wife and I's favoritist old hangouts. That place is always jam-packed. Don't even think about showing up there hungry, no less on a Thursday-Sunday night expecting a reasonable wait time. Their famous beer book is a veritable tome. Belgians and whatnot I think. I'm not an experimenter in that department, as I only drink domestic macro-brews.

However I will say that the food is tremendous, burgers and fries in particular.

So what were that dude and broad doing on the roof/balcony at 3am???

Smoking no doubt. That's a habit well-known to be health hazardous, right?

I know a guy who was out on a fire escape in Manhattan that also gave way. He fell some 10 stories breaking umpteen bones; furthermore, one of his *boys* got severed on the way down!

Yeah, he was/is a chain smoker.

So get rid of those cancer sticks, will y'all?

Although that might not help - at least according to my golfing partner. He sees smoking as just a manifestation of irremediable stupidity.

And, man do I miss the bars, restaurants, and people in Philly. A buddy of mine is coming into town tomorrow and bar-wise there's pretty much NOWHERE in all of Boston that I feel like taking him.

If we were in Philly....we could find great food, drink, and atmosphere every night somewhere different for a month, at least.

What kills me is seeing those pitiable twentysomething kids in Boston who claim to *love it*. These Morons have no idea how much else is out there. Yet these provincials will be sure to stay here forever....and elect the next set of 40-year-reigning Masshole politicians.

I will find SOME poopy bar to take my buddy this weekend. Then it's off to Kfell country for a little hike during peak NH foliage. Mount Madison most likely.

Then next weekend, I'm off again to Naples, Fl for my annual golf trip. Last year I tried to get a GutterBuddy from Philly to bring me a soggy cheesesteak from the airport. He said he would but didn't - thinking I was kidding, which I WASN'T.

I'll ask him again this year. If he fails next weekend, I'm just going to have to swipe a few (extra) sleeves of Pro V1s out of his bag. 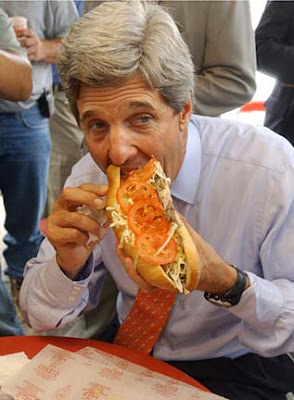 He probably ordered a *cheesesteak hoagie*....which no one EVER orders.

Reminds me of the time this galactically out-of-touch Moron said his favorite player on the Red Sox was "Manny Ortiz".

There's not a doubt in my mind that if there were a *cheesesteak-soft pretzel-hoagie* on the menu....that John Kerry would have ordered it.
Posted by CaptiousNut at 8:23 PM

Come on up and buy plenty of booze and cigs and consumer tax free up here...

I ain't buying nothing up there. Brown bagging my food at this very hour. Leaving early tomorrow for Gorham. I wouldn't patronize that Obama-electing state!

What about my boy Josh?