One More Crudity From NH 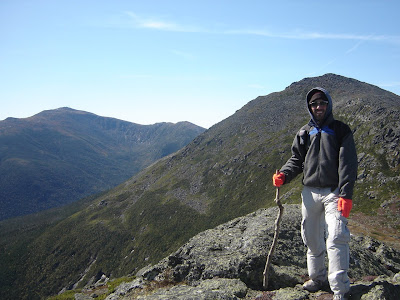 I've known the college buddy who accompanied me this past weekend for over 16 years - or, at least I thought I knew him. Thankfully he's pretty much incognito in the above pic - because the info I'm about to reveal about him is jaw-dropping - way beyond what that chunk-a-do broad said at the bar.

First of all, my CollegeBuddy made that 5,000 foot climb fully fecated.

Because I knew he was not a morning person (requires 8 hours of sleep!), a veritable slow mover, the night before I asked him, jokingly, if he was going to be able to evacuate in the 40 minute window between wake-up and departure. Without a clear answer I probed, "Are you on a daily?"

And he smugly responded to my hectoring that some days he *doesn't go at all*!

"Oh really?", I thought. Is it possible to have an ego on this matter?

So morning came and, let's just say, CollegeBuddy had to add a roll of bathroom tissue to his backpack.

I had my camera....and was quite sure that with all that Burger King and beer in our his system....that some sort of *bloggable situation* would occur on our 7 hour hike.

He made it to the top carrying all that excess baggage, but halfway down he told me to *go on ahead* - it was time.

I took off yet he caught me 10 minutes later all geeked up and with a spring in his step.

I asked and he confirmed a successful departure. Then, he said something about the hard part being *staying clean*.

He said that it was only recently that he *learned not to stand up before wiping*.

CaptiousNut - What do you mean....stand up?

CollegeBuddy - I used to stand up first?

CaptiousNut - What are you talking about?

CollegeBuddy - I used to stand up first and I'd get all these messy sh*ts.

CaptiousNut - What do you mean 'stand up first'? You would wipe standing up?

CollegeBuddy - Yeah. No one ever told me to wait before I stood up?

CaptiousNut - No one ever told you to wipe while sitting down?

CollegeBuddy - No. I just figured it out on my own about five years ago.

Okay, now this was from a 35 year old Ivy League graduate. How am I supposed to digest this?

He was an engineer by training to boot.

Yet for 25 years he thought nothing of getting himself into a half-closed position a split-second before clean-up.

As a friend, I'm sincerely happy about his discovery. But I do wonder why he didn't take that realization all the way to his grave. He should have pondered the ignominy of perhaps being the only one on the planet challenged in this department.

And I wonder why he would tell ME, his ball-busting buddy with a blog called Marginalizing Morons!

Think about it....he had no idea how to properly wipe his own arse.

He and I argue *politics* all of the time. From now on, at any standoff I can just say, "whatever....you didn't even know how to poop!"

Now I'm not one to watch another man urinate, but the next time I see him, I may try to catch a glimpse of CollegeBuddy doing so. I suddenly find myself very interested in his *technique*. 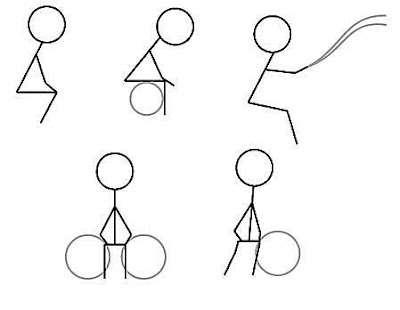 The above graphic is from *Establish your pooping method* on eHow.com - How to Poop in the Woods.

That clever graphic comes from here.
Posted by CaptiousNut at 7:54 PM

Email ThisBlogThis!Share to TwitterShare to FacebookShare to Pinterest
Labels: scatology

Unhealthy not to "go" daily. He should really eat more fruit and veggies. Bet he is a fast food junkie.

Hi. The above graphic is actually from here. I made it. Not your fault - the ehow author is an a-hole for stealing it.

I know full well what it's like to be unattributed.