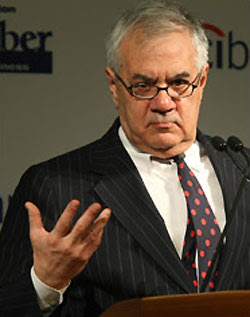 Here's the latest tripe from Barney Frank - he said:

No one has ever gotten reelected where the bumper sticker said, "It would have been worse without me." You probably can get tenure with that. But you can't win office.

Is there any difference between being a Democratic Massachusetts Congressman, in a grotesquely gerrymandered district for 28 years and being a TENURED professor?

I don't think so - except that professors can only steal small amounts of money.

Now I haven't time or interest enough to read the opinions and fulminations of others, but the few places in which I saw this recent quote of Barney Frank's didn't address the *substance* of what he said.

I have heard sundry politicians over the years, in one form or another, assert that very defense - "It would have been worse without me". In fact I'm sure I've heard the invert say it himself. Though usually, his more indirect version goes along the lines of - *everything bad was caused by the other side*.

The fact is, a ginormous chunk of present-day Commi politics is completely based upon *it would have been worse*.

Tell any of these agitators that Big Government ought to be out of education, healthcare, or housing and the first thing they'll fire back is that in such a case, *no one will educate, medicate, or shelter the poor*.

Essentially, they are saying that in a free market, things would be worse.

Prevarication experts the world over all concur - if you're going to tell a lie, go for a really big one.

And there's no bigger whopper than truth inversion!

Barney Frank-ly Is A Dissembling Socialist
Posted by CaptiousNut at 7:31 PM

exactly!
Barney Frank's district has no competition. Last couple of elections, he was the only guy competing. (ref wiki page of his district)

The way he presided over the biggest looting by financial industry in US history, i wonder if he gets elected next time. Only if there's somebody contesting against him.