Screwing The Consumer, On The Stealth 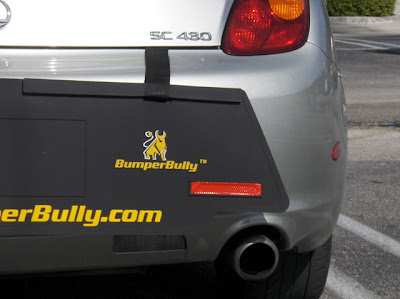 Have y'all see this new product?

Ain't nothing like putting what amounts to duck-tape on your snazzy Lexus, now is there?

Kids today have no clue about this, but bumpers used to be practical. They could withstand a substantial ding.

But for the past 10 years or so (I believe), car manufacturers went away from that. Instead they opted for *looks* with smooth, plastic, collapsible fenders, or did they?

Some guy told me that cars can't withstand fender-benders anymore because of some collusive trade-off between manufacturers and auto-part suppliers.

In other words, this decision was a political/economical kickback whereby the parts suppliers would profit at the consumer's expense. The car companies probably wanted to squeeze their suppliers on costs and were forced to make this concession.

Think about it - consumers with this Bumper Bully are adding a mere half an inch of rubber for protection....that's how impractically today's cars are designed.

Note that I could be totally wrong on this hypothesis as I am just relaying what someone told me.

Generally speaking, unlike most Americans, I don't give two hoots about *cars*. I happily drive clunkers and ain't worried one bit about scratches and dents. So make sure you take precautions against me and my brethren.
Posted by CaptiousNut at 11:14 PM

check out the bumper of a cafe standard exempt pick-up truck the next time you pass on in a parking lot. Trucks still have steel bumpers and if you ever had the misfortune to rear end a pick-up truck the truck will have a nick or minor dent while it will cost you some serious money to fix your car. Back in the day cars had steel bumpers now bumpers are made of foam. There is a big difference in weight between the two. I would bet bumpers are so cheap today because it is easier to meet cafe standards w/ light weight bumpers compared to old fashion steel bumpers. Back in the day I remember going to a junk yard to get a used bumper for a 12+ year old car and it took 2 guys to carry it thru the 100 yard maze from the junk yard to the parking lot recently I had the misfortune of needing a bumper replaced and it did not weigh more more than a bag of groceries.

You should've done more research on this topic before mouthing off. Usually that gets you by okay but this time, FAIL.

Look, there are a lot of reasons bumpers have changed. The main one is SAFETY, not just for the people inside the car but people outside the car as well.

With old steel bumpers that were bolted to the frame, you had rigidity. You hit something, it's sending shockwaves throughout the whole vehicle (including the passenger compartment). Good for low-speed impacts with low-mass objects, bad for high-speed impacts or impacts with things of higher-mass.

Now, bumpers are designed to crumple and direct force into other parts of the vehicle that have specially designed "crumple zones." This dissipates force around and away from the passenger compartment. It also means that impacts with low-mass objects (such as other human beings!) will result hopefully in less damage and harm to everyone involved. Honda, for instance, has pioneered development of pedestrian-safe car hoods that are designed to cushion the blow of a pedestrian who might be accidentally struck and land on the hood.

You should read more, it's really amazing stuff that auto manufacture cars that are safer, sportier and better looking than days of old (well, for most people, maybe not my pops) and that have all these amazing engineering features under the skin.

Now, that being said, those bumper buddy things are ugly and stupid, and they don't really work. And they def cheapen the look of a nice vehicle, how lame! If you live in a place where you need one of those (NYC?) you may want to consider privatizing roads and traffic... that or stop being a tightwad and use a freakin' parking plaza!

As for my *mouthing off*....the post is clearly qualified as hearsay.

It is a fair point and good debate, however. Are bumpers made to withstand dings from parallel parkers? Should they be softer to protect the vehicle/pedestrian they might hit? Etc.

As for those Morons in cities who park nice/new cars on the street....they deserve every dent they get!

These bumper things are funny. One of the nicer features in higher end cars is the little sensors on the back bumper-so you know how close you are to the car behind you. The bumper bully type stuff completely eliminates this. And yes, I like cars. Oddly enough, in Europe virtually every car has the little bumper sensors-even things like Corrolla's and Focus's.

and yes, the sensors are pricey to fix.

No. And I drive a lux pick up-oddly enough. But that's the way the tax laws were written. I can't see a darn thing behind me unless it is a at least 5 feet tall. Those little sensors are nice.