So Much Free Stuff Online...

....That home-based education is a cinch! 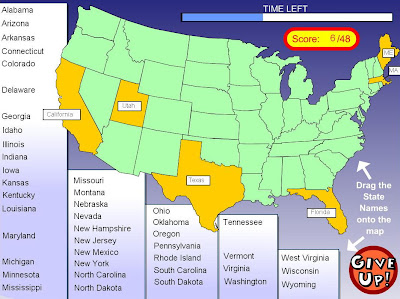 My son has been doing this timed US Map Quiz all morning.

Your kids (and West Coast Tom) might be sufficiently challenged by it as well.

UPDATE - 1.5 weeks later my son's record is *30 states* in the time alloted. We'll see if he can get them all done by his 5th birthday next month.

UPDATE - less than a month later, the Prince has passed the test! 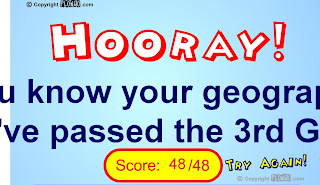 Posted by CaptiousNut at 1:43 PM

OMG, PERFECT! My (8th grade) sister was complaining last night that she wanted to quiz herself on the US map but she didn't have a blank map. I said go find one on the net and that seemed like a gargantuan task for her. I will send her this link.

8th grade sister? how old are u taylor? looking at your webste and your coments on this site, i thought you are one old-fat-guy-on-computer.

ah! the beauty of internet. you can say what ever you want.

She's my older sister. I am in 7th grade.

taylor, google search for captiousnut is bringing up your profiling of c-nut. It seems you are NYU grad not anywhere close to 7th grade. that was in 07, so what do u do now anyways?

HA! You got me! Thought the whole "I'm a 7th grader" diversion would work.

I'm employed. See what else you can dig up with your excellent google skills.

Think about that, son.