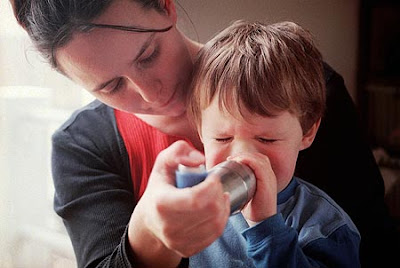 I'm up late early today. Because I fell asleep at 9pm, my standard four hours had me wide awake at 1:18am. Laying there, I had to hear my poor son coughing in the other room intermittently.

He's got *asthma* or whatever. Spring-time pollen is rough on him.

In fact, it's been so bad the past couple of nights that we've had to stir him and give him his more potent inhaler around midnight.

Then, just now, I come to my MIL's computer and see this headline:

Scourge Of Asthma Is Acute In New England

Not only does New England have the nation’s highest rate of asthma, but the disease remains poorly controlled in most patients — routinely causing trips to the hospital and lost days at school and work, according to a study being released today.

The Asthma Regional Council of New England, an independent agency underwritten by the federal government and foundations, finds that roughly two-thirds of New England’s 1.3 million people who have asthma regularly forfeit sleep, wind up in the emergency room, and frequently puff on inhalers intended as drugs of last resort.

The report is the third since 2003 to show that New England adults have the highest rate of asthma in the nation. But this year’s study is the first to portray with such precision the breath-robbing consequences of asthma in the region, where nearly 1 in 10 residents have the disease.

Of course the article is *alarmist* and definitely *propagandistic* - the funding cry of a financially interested public health officials.

But the subject is also broadly relevant for me, given my son's allergies.

It is curious, however, that here in New England, home of the *most educated*, home of the *best healthcare*, and all these self-styled *environmentalists*, we have the highest rate of asthma in the nation.

Perhaps our status as most asthmatic is a result of having the most *diagnostic* organs?

Or perhaps it's because New England is essentially the oldest region of the country. I believe asthma rears its head in 'old coots' and 'old bags' - on people that never had a respiratory problem in their entire lives. (Were they former smokers?)

Maybe it's all the old, dusty, moldy buildings? There sure ain't nothing green or environmental about old construction!

One problem with my son is that he's still young and inarticulate. If he were a little older he'd be able to tell us when he was having trouble breathing. Then we could pinpoint it better. For example, my wife and some quack allergist say he's allergic to cats/dogs - in fact that line of thinking led to the inhumane slaughter of my dear feline.

I don't know. Until my son can walk into a house and tell me he smells or senses the presence of a cat/dog....I won't fully believe that he's allergic to pets (or to any of the other 86 things the *allergist* alarmed us about).

Dust, they say, is a big deal. In fact, I have a family member who rented an apartment in Brookline, Massachusetts. The long carpeted corridors of the building turned out to be so dusty that he couldn't bear to sleep in his apartment. I believe he had to crash at his mother's house until the 1-year lease ran out. And there went $24,000 down the drain! (He probably could have legally broken that lease, now that I think of it.)

I had been thinking, hoping, that my son's so-called asthma was getting better each year. In the past it's been so bad that he'd wake up at night wheezing violently - so bad that he almost couldn't breathe. My wife would try to give him that Benadryl or whatever and he's gag it right up. Episodes like that were truly scary for us young parents. Thankfully, we haven't had a case of that in a while - hence my optimism.

But the past few days have been rough. We're down on Long Island this week where it's a tad warmer and they are further into spring with all its pollen and whatnot. Plus we are staying at my MIL's house which has a bunch of old carpets.

Before we move in, at least a couple of those will be removed.

In the meantime....I'm going to google for holistic, all-natural asthma remedies! 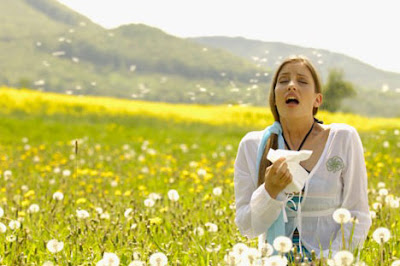 Posted by CaptiousNut at 3:24 AM

Poor guy - my nephew has allergies something fierce, too. Apart from the old decrepit abodes there's also the trees which conspire to kill one's sinuses with aplomb. Massachusetts in particular is particularly well-forested despite the large population per land area, in comparison to other states. If you get any good remedies, be sure to share.
-Rich

Our family has to deal with asthma and allergies. I was recently told about a book called Probiotics Nature's Internal Healers. I went to a class where a lady had ordered Kefir grains. She made her own kefir daily. It is a powerful pro biotic. Allergies are due to a weak immune system. This helps kick it into gear. I think it does not taste great. However, I have found that mixing it with greek yogurt and blending in banana and frozen berries it is tolerable. Bottom line it helps my child who has a difficult time breathing when she runs. When I give her kefir she is able to run just fine. You only need about 1/4 cup daily. Smartest to make your own to get the best results. It is easy once you get started.

Hopefully your daughter will outgrow/outrun hers!

Read "Mornings on Horseback" to see how Teddy Roosevelt killed his asthma.