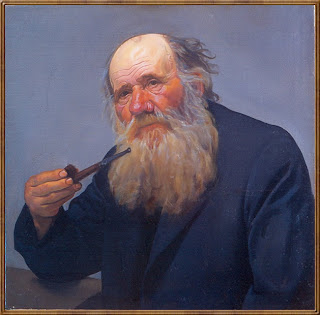 Yesterday I blogged on C.S. Lewis.

Growing up he had great difficulty dealing with his crazed father. Join the club, right?

Here's an excerpt from Surprised By Joy that testifies to that frustration:

One conversation, held several years later, may be recorded as a specimen of these continual cross-purposes. My brother had been speaking of a reunion dinner for the officers of the Nth Division which he had lately attended. "I suppose your friend Collins was there," said my father.

F - (After a pause) Did these fellows not like Collins then?

B - I don't quite understand. What fellows?

F - The Johnnies that got up the dinner.

B - Oh no, not at all. It was nothing to do with liking or not liking. You see, it was a purely Divisional affair. There'd be no question of asking anyone who hadn't been in the Nth.

F - (After a long pause) Hm! Well, I'm sure poor Collins was very much hurt.

Lewis described his father as:

...not so much incapable of understanding anything as determined to misunderstand everything.

Are you related to anyone who's thoroughly impossible to communicate with on even the simplest terms? With whom even *the weather* is a treacherous subject?

'Yes' on all counts for me.

Most tragically, some even marry their conversational nemesis:

Posted by CaptiousNut at 7:21 PM