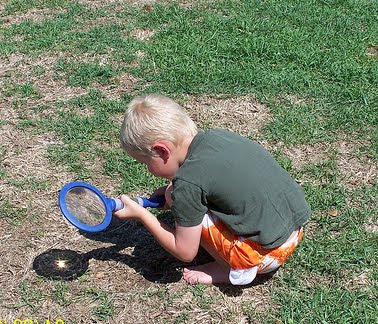 Saturday, after golf, I was basking in the unseasonably warm weather on my deck when I noticed my 5.375 year old son holding a magnifying glass close and steadily to his bike. He turned and said to me, "Dad, I want to start a fire."

Say what? Where did he get this idea?

Of course, I instantly recalled, that I had told him about this neat *trick* some time ago. The little bugger doesn't forget ANYTHING. I think I told him how my brother once singed the hair of our cousin with a magnifying glass while she was sitting and watching a soccer game.

"This is just great," I figured, "now I have to put the magnifying glasses out of reach next to my knives and semi-automatics..."

That's all I need - for my son to become a little pyromaniac....like I was.

I used to play with matches every chance I got. I even set a blaze (or two) in the woods that attracted the fire department. However, my worst offense was, along with my brother and another neb$hit, starting a fire under the raised wooden deck of a neighbor's above-ground pool. We were caught red-handed on that one. It's no wonder those people, the victims, never really liked me after that.

Fire is nothing to mess around with. Kids just can't possibly fathom how dangerous it is. So I was going to address my son's curiosity with the gravity it deserves.

I had him come over and hand me the magnifying glass - then I summoned his little sister.

I then proceeded to show him how to *do it*. I held it carefully above my shirt, concentrated the bright spot on my stomach,....and burned a hole in the shirt I was wearing!

But I really shouldn't worry and/or draw false comparisons to my childhood.

That's because my son is HOMESCHOOLED....whereas I was bored, angry, and most likely acting out against the government school penitentiary my malpracticing parents sent me to.
Posted by CaptiousNut at 8:17 PM

Yes, he has seen that movie.

I can't believe they's broach such a *legal liability* subject in a major motion picture.

If he burns down my house....I'll sue Pixar!