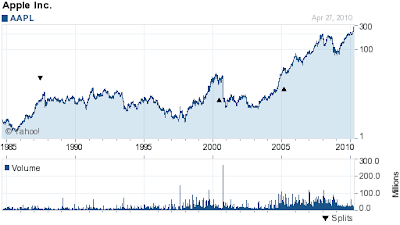 Some guy has a post up that compares investments in Apple products - e.g. iPhone, iPod, Powerbooks,...- with what similarly timed investments in shares of Apple stock would have returned.

Obviously, it's a highly selective trough-to-peak comparison at the moment.

The only nice part about it, is that it essentially mocks those Apple-worshipping geeks who ran out and bought every new and slightly-tweaked product.

Of course, without that irrational consumerism....the stock wouldn't have risen 40-fold over the past seven years.

BTW, contrived comparisons like this are nothing new. I remember reading somewhere, perhaps in The Millionaire Next Door, that if a married couple who had been smoking a combined 3 packs of cigarettes a day, for 50 years, had instead invested that money in Philip Morris....that they'd be retired happy and healthy, with a $2 million equity position.
Posted by CaptiousNut at 6:42 AM