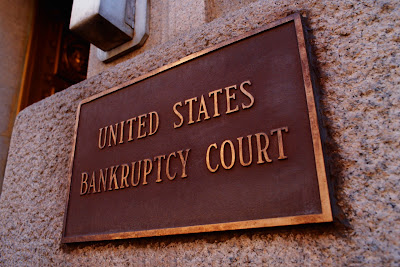 This afternoon I skimmed through my landlord's glorious 88 page bankruptcy filing. (This stuff is all online now.)

Recall he originally filed essentially at midnight before the house I rent was supposed to be auctioned off in late March. That tactic delayed foreclosure for what was originally advertised as 2 months - though it seems it'll take longer because the lender is *inefficient*. After the original filing, all the creditors are alerted and have to get in line for their share of the remaining assets/income (zero divided by...). And right before this date arrived, the deadbeat scumbag got the court date pushed back yet again, claiming he needed *more time* to enumerate his debts.

BUT, his time came last week.

Right off the bat, on page one, I busted a gut laughing:

NOTICE OF AMENDMENT TO ORIGINAL MATRIX

Pursuant to Rule 1009 of the Federal Rules of Bankruptcy Procedure, the above captioned Debtor submits the following amendment to the original Matrix. Attached as Exhibit A are creditors who were inadvertently omitted from the original matrix and but which creditors appeared on the Debtor's schedules which were filed on April...

Okay, so he *inadvertently* forgot some of his debts - no surprise there, given their number.

BUT guess who's listed first - HIS BANKRUPTCY ATTORNEY!!!

Now why would that be an amendment to the original claim? And why would a lawyer only take $1,100 upfront for a $2,500 bankruptcy filing from a guy who he knows well is BANKRUPT?

In a section where the knucklehead is declaring *assets* or whatever he lists that he rents a safe deposit box. What's in it? Or, what WAS in it?

Which of you Morons out there actually believe him?

Alright, here's a better one. Click to enlarge this graphic: 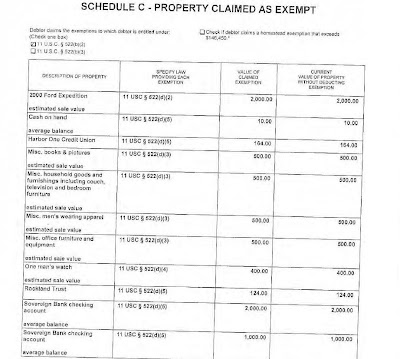 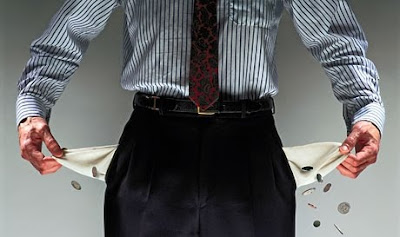 On the *eviction* front it's kind of quiet for the moment anyway.

Yesterday I had my landlord served with a list of grievances and my expressed intent to *not pay rent* until they were addressed. He's already been copiously notified by both me and the local authorities but I figured it couldn't hurt to be thorough. I expect to receive from him another court summons in the next few days. I expect he'll be taking me to court to try to collect rent and/or evict me yet again.

Good luck to him!

Oh yeah I almost forgot. I scored another victory against him this week. I got the town to issue a *cease & desist* order against him. He's no longer allowed to run his shady lending operations from the detached office building on my property. They've threatened to fine him $100 a day if he continues to violate the local residential zoning laws.

Twice, TWICE in the past few weeks I actually offered him MONEY to move out of the office building. He's that annoying that I would go in my pocket to not have to see his mug everyday outside my window, in my driveway, etc. I offered him the $867 water bill (I'd eat it) after our coerced mediation. And then again 1.5 weeks ago I offered him $1,500 to vacate the property altogether.

And in both of my (email) offers I threatened, "...take it because (the building inspector) is going to boot you out anyway."

That was a bit of a bluff because I had been stiff-armed in my attempts to get the town to act; and he called me on it both times. But then my persistence finally paid off. Let's just say it took a whole lot of strategy, resourcefulness, and arm-twisting to get it done. EVERYONE, including my wife and a wired local attorney, told me to 'drop it' and that I 'had no chance'. I refused to. Don't any of y'all ever bet against me in a war-of-wills or a staredown or anything.

For the prior installment see - Eviction Chronicles - Served Again!.
Posted by CaptiousNut at 8:29 PM

What a pain in the hiney. How's your golf game?

We all need a villain to direct our *worst* at!

This reminds me I have to update my golf blog.