The Celtics have held serve, winning the first two playoff home games against the Miami Heat. All of a sudden they look like the powerhouse team that started off the year.

How'd they do it? 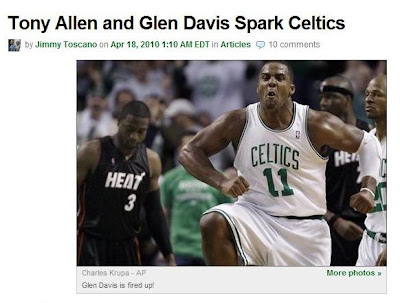 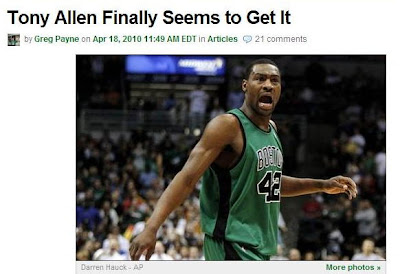 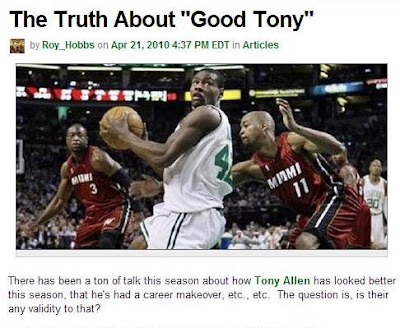 Well they listened to me!

Here's what I suggested, amidst their woes, at the start of February:

For all their flaws, I say start Tony Allen and Glen Davis. Have KG and Ray Allen come off the bench. Athletic young guys may commit annoying turnovers, but they also keep constant pressure on the other team by banging the boards and running the floor. And both of those 'young coots' have proven they can play when they get consistent minutes.

Both players have, as the headline states, sparked the Celts. Davis I believe had 24 points last night.

I put the blame here squarely on the coach. He's too *conservative*, too deferential to the overpaid 'old coots' like Garnett and Ray Allen. Davis only put up those numbers yesterday because KG's suspension FORCED Doc Rivers to give him the minutes he deserves and has been denied.

These two guys should rightfully be subbed in at the 6:00 mark of the first quarter each game - way sooner than what Rivers usually does.

I remember those Detroit Piston teams of the late 80s/early 90s. They had some great talent in the starting line-up, BUT it was their super-subs Vinnie Johnson, Dennis Rodman, and John Salley that routinely annihilated the opposition.

You have the deepest team in the league by far. Use the bench, Doc.
Posted by CaptiousNut at 8:39 PM