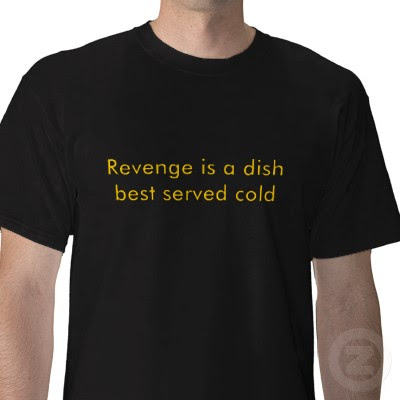 In January, my wife and I decided not to pay rent. We took pre-emptive action against our landlord who was going to just *steal* our un-escrowed security deposit on our way out. The Moron kicked and screamed, served us a notice to quit and then tried to take us to court. At the last minute he capitulated in the face of my threatened counter-suit.

In March, with our house scheduled for *auction*, we decided to not pay rent. More accurately we told him that our pre-paid *last month* would have to suffice for March. Displeased with that, the scumbag had us served with a notice to quit on March 2nd!

Recall that gripe of HIS ended up with HIM writing me a $1,200 check in court-sponsored mediation!

April came and we had no hot water due to his negligence (also clogged sinks, a bee hive in our shed, a malfunctioning stove, etc.) so we weren't going to pay him a dime, no less a nickel. He kicked and screamed yet again. Though curiously, he hadn't initiated legal action against us.

That is until today. This morning I was served with my third notice to quit! I expect him, in 10-14 days or so, to attempt to legally *vacate* the terms of our mediation - i.e. demand payment and/or eviction.

It is interesting that he waited until April 19th to *re-start the process*. His uncharacteristic hesitation suggests some exhaustion PLUS, perhaps, a non-optimistic view of what a judge might say.

I'm fairly confident that he'll get buried in court but it almost doesn't matter.

In the rare event a judge says something ludicrous like I didn't sufficiently notify my landlord of the problems and makes me pay....I don't care. The money isn't the issue for us; it's about moral principle. I'd be happy to pay rent to the bank or to donate it to charity. If this dirtbag wants the money I'm going to make him work for it (pay filing fees, pay servers, and pay an attorney).

My wife and I have agreed that we'll happily go to court with light preparation (in terms of not hiring a lawyer, documenting the neglect, etc.) Again, if a judge rules against us....we don't care as we're moving on anyway.

Plus, should I be ordered out I can always just force the broke-a$$ Moron to physically evict me. That will cost him $4,000 out of his empty pockets.

He can't win and I'm trying to pound that reality into his dense skull.

We just don't want the end of our stay here marred by too much animosity. So we're taking a laid-back approach to whatever happens.

I just called to confirm the new auction date and was told that *none is scheduled*. So the scam artist has successfully delayed the authorities, yet again. By rights and the laws of other eras he'd be in jail for $4 million in mortgage debt plus another 500k in unpaid credit card bills.

The problem, for us, with him having punted the auction to who knows when is that it's probably given him more *false hope* and hence more energy to battle us.

Unfortunately for him, I have a rather large reserve tank of fuel myself!

Eviction Chronicles - Brimming With Schadenfreude
Posted by CaptiousNut at 10:23 AM